WoW Dragonflight Zones guide – what places are there in the Dragon Isles?

All articles
Just like in every other WoW expansion, we get a bunch of new places to travel to in Dragonflight. Some expansions brought us entire new worlds (Burning Crusade, Draenor, Shadowlands), some unveiled new continents of Azeroth (Wrath of the Lich King, Mists of Pandaria), some gave us a little bit of everything (Cataclysm).
Dragonflight will join the group of expansions that gave us islands (Legion, Battle for Azeroth). That doesn't mean that there won't be much to explore. Quite on the contrary: these islands are way bigger than they seem and they hold lots of interesting stories and encounters for players to enjoy. Let's take a closer look at the zones that we'll find on our way to resolve the mighty ancient dragons' problems and see what's good about them. 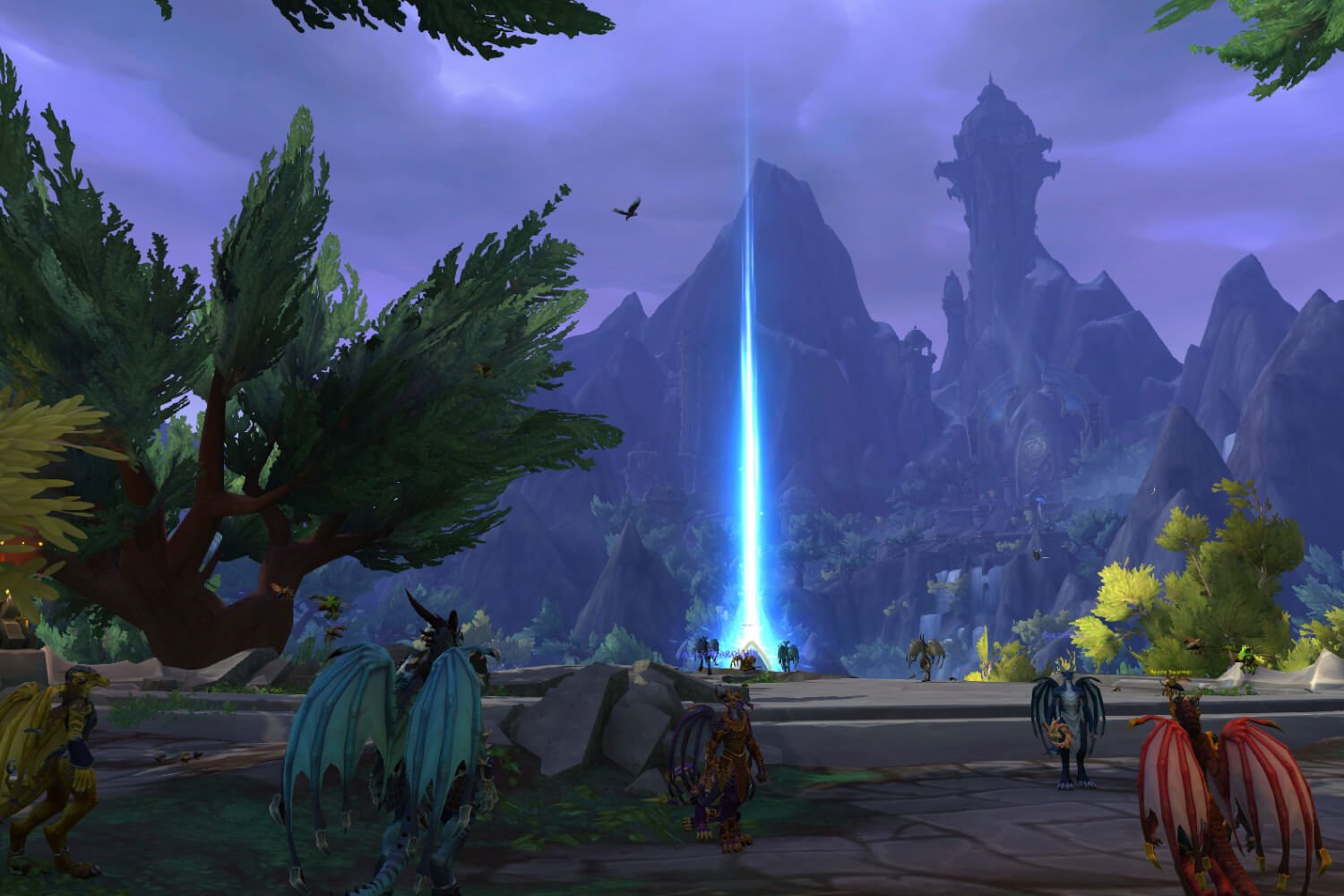 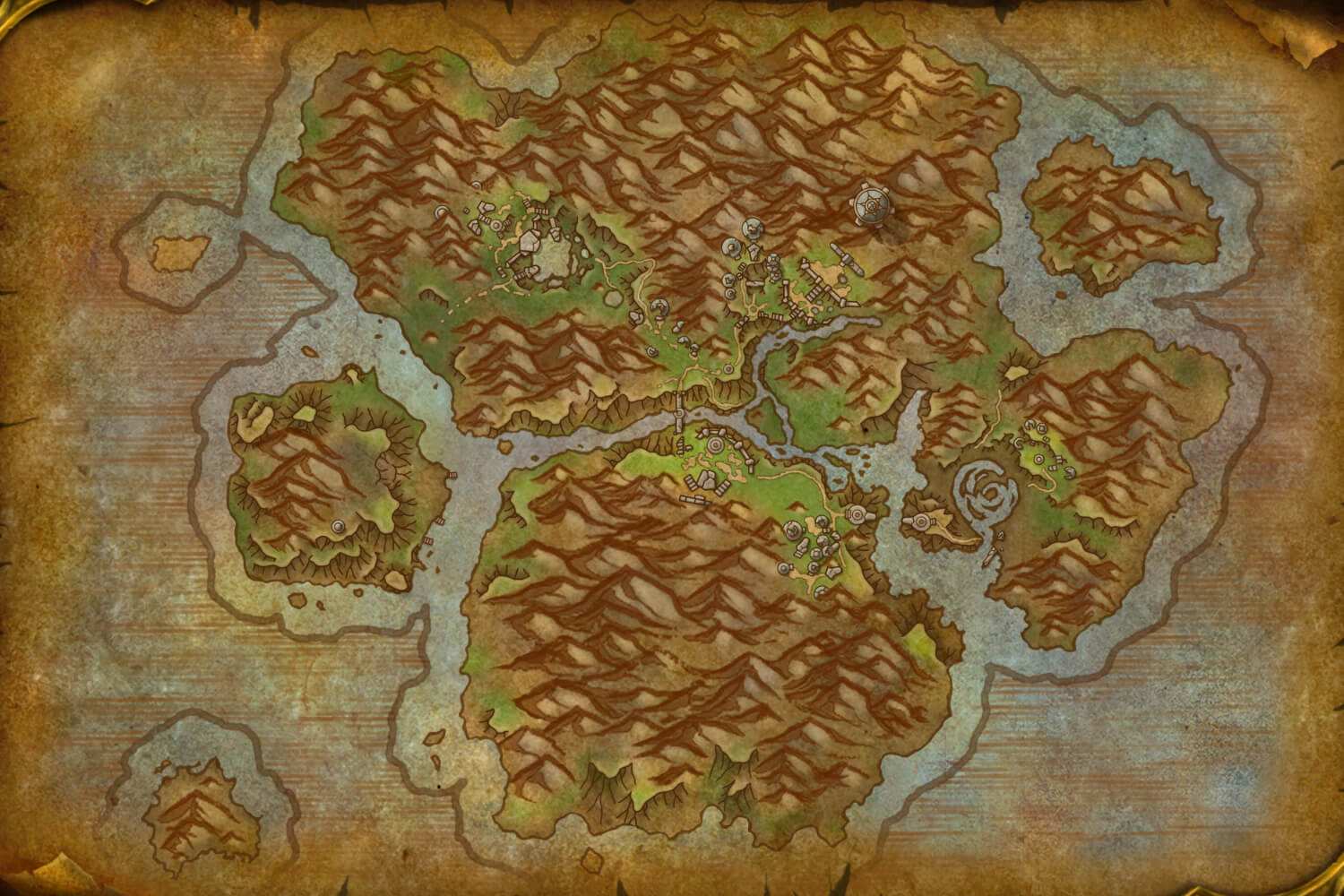 As you know, in Dragonflight we'll get a new race called dracthyrs: humanoid dragonkins that can only be one class, the evoker. The evoker is also a new addition, so you will likely not get bored during leveling – their all-new skillset will keep you excited. Your journey as a dracthyr starts at level 58 in a unique zone of the Forbidden Reach. It's located in the north of the Dragon Isles archipelago.
It's a small and mostly mountainous piece of land that has been abandoned for many years. It used to be a training facility for the black dragonflight but something horrible happened. We'll learn about that in detail while questing on the island. Dracthyrs are resting there in a sort of stasis, so the first thing that will happen to you there is you will be awakened. Damn, who wouldn't hate that!
Anyway, the zone is not much to play with since it mostly offers some tips to first-time dracthyr/evoker players. You'll have lots of opportunities to try gliding around as the place has so many cliffs to jump off. Also, you will witness some epic action with huge dragons but you won't really have to participate much in it – it's a starting zone after all, remember? You get a brief intro into your character's race and class lore, a couple of lessons of gliding and using your abilities, and a set of somewhat decent leveling gear. After that you're sent to your new faction's capital – by this point you'll have chosen between Alliance & Horde already.

Waking Shores – Where the adventure begins 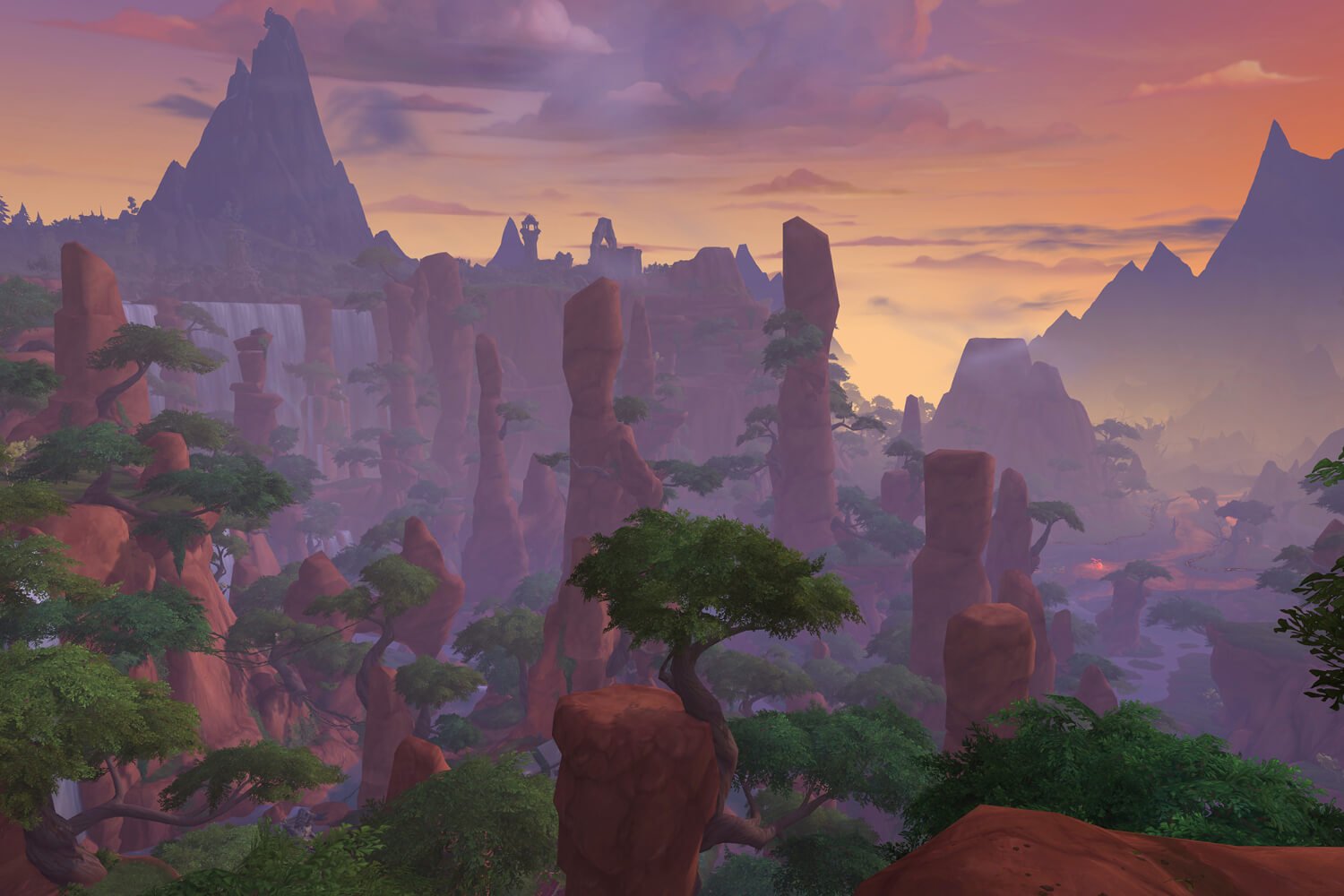 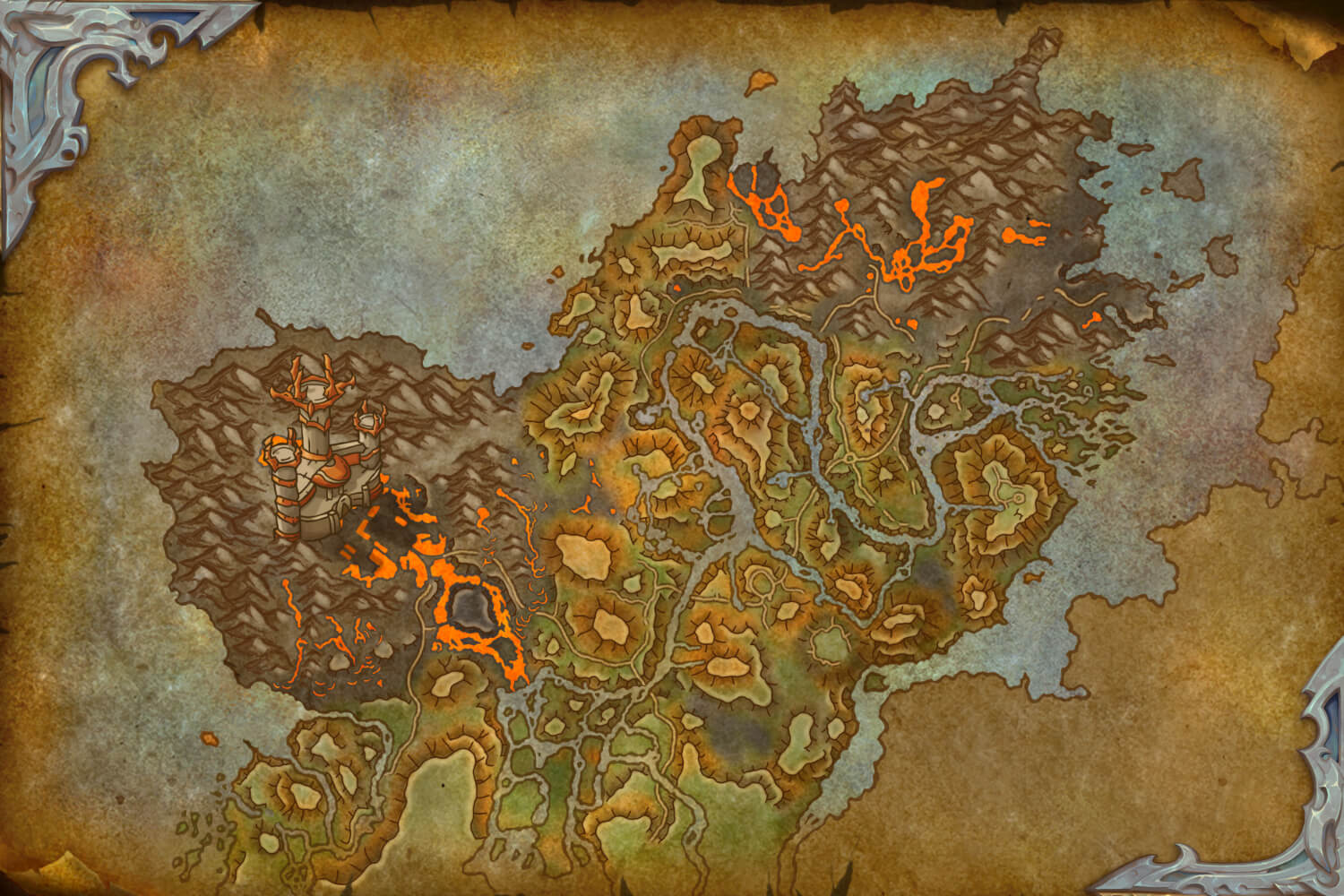 The proper Dragonflight experience starts in the Waking Shores. It is a high-level zone for veteran players who will start their Dragon Isles adventure there. The shores are home to 2 dragon races: the red and the black ones. The former is led by our good old friend Alexstrasza who needs some help with local elemental giants. The latter is in a weird state and our another acquaintance Wrathion comes to put things in order and reclaim the Obsidian Citadel. The citadel is the black dragonflight's fortress and we'll have to work hard to kick unwanted guests out of it.
Aesthetics-wise, this zone is reminiscent of Cataclysm's Mount Hyjal but the Firelands section of it got expanded. There will be lots of places for you to enjoy gliding with your dragon riding. You will find ducks here too, which is the first time this type of birds appear in the game. Also, you will meet trolls there – another proof that trolls live everywhere – as well as gorlocs (little monsters from Northrend's Sholozar Basin) and djaradin, the elemental giants we've mentioned above.
There are 2 dungeons in the Waking Shores: Ruby Life Pools and Neltharus – the latter is that very Obsidian Citadel that Wrathion is looking to reclaim and it only becomes available at the maximum level. As for factions, you will mostly deal with the Alliance's Explorer's League and the Horde's Reliquary, both of which are there for the sake of science and learning more about dragons. Their joint effort is known the Dragonscale Expedition and that's who you'll deal with throughout your Waking Shores journey. 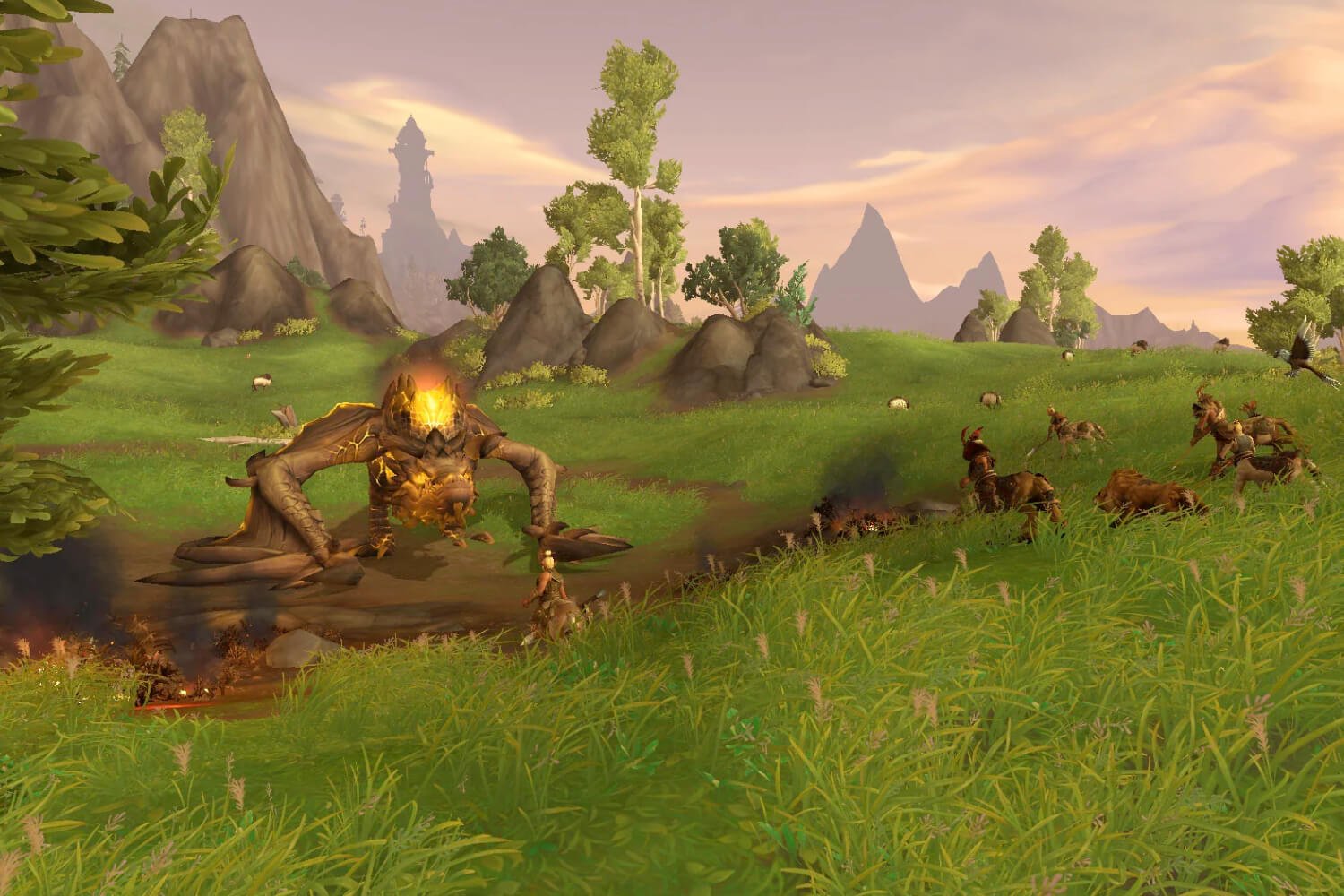 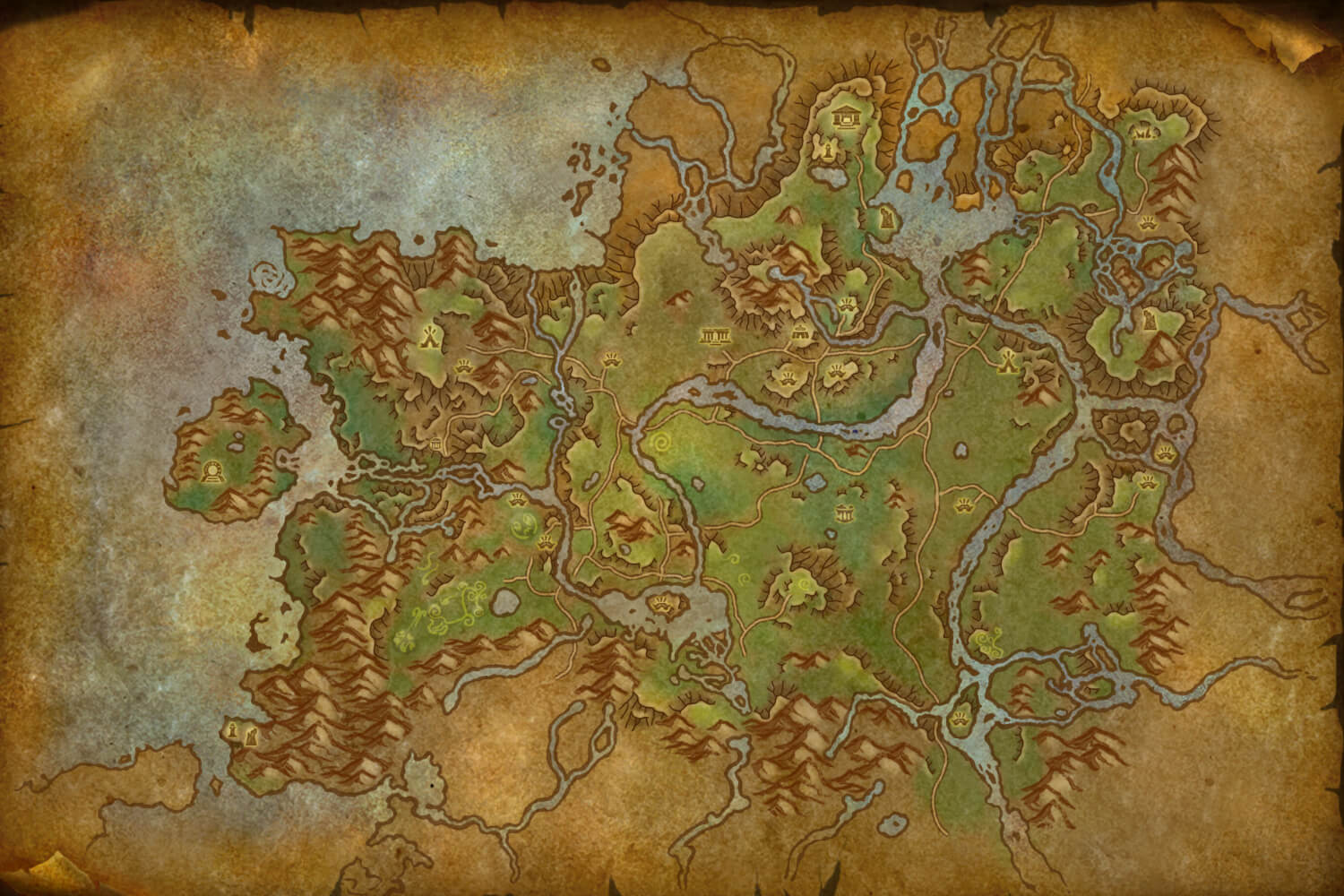 Don't let the name deceive you: although there are indeed some plains here, there are also plenty of groves, hills, and cliffs around. The plain part of the zone is mainly populated with centaurs. The Maruuk clan will be friendly towards players and we will have an opportunity to earn some renown with them. There will be lots of centaur-related activities to take part in: starting with a caravan story (you need to protect an ever-moving caravan and help its members with their chores) and all the way to the so called great hunts (open-world group challenges). The zone looks really promising regarding how many things to do there are for all kinds of players and we're really excited about it. For those of you who need another WoW zone to compare this one with: well, perhaps the Valley of the Four Winds is the closest we've ever got to what Ohn'Ahran Plains will be.
However, it's not only about horse-people. Since it's a part of the Dragon Isles, it's only natural that another dragon clan made their home there. This time you'll interact with the Green dragonflight. You will find its members in mysterious groves and shrines. These encounters will give you more background about how life is in the Isles and what made dragons come back to their native place after so many years overseas.
As for dungeons, you will participate in an epic battle of the Nokhud Offensive. The centuar clans' civil war is raging and you join it to help one of the sides. Needless to say, your participation might become the decisive advantage for the clan... But we won't tell you the whole story. You'll learn it all yourself pretty soon! 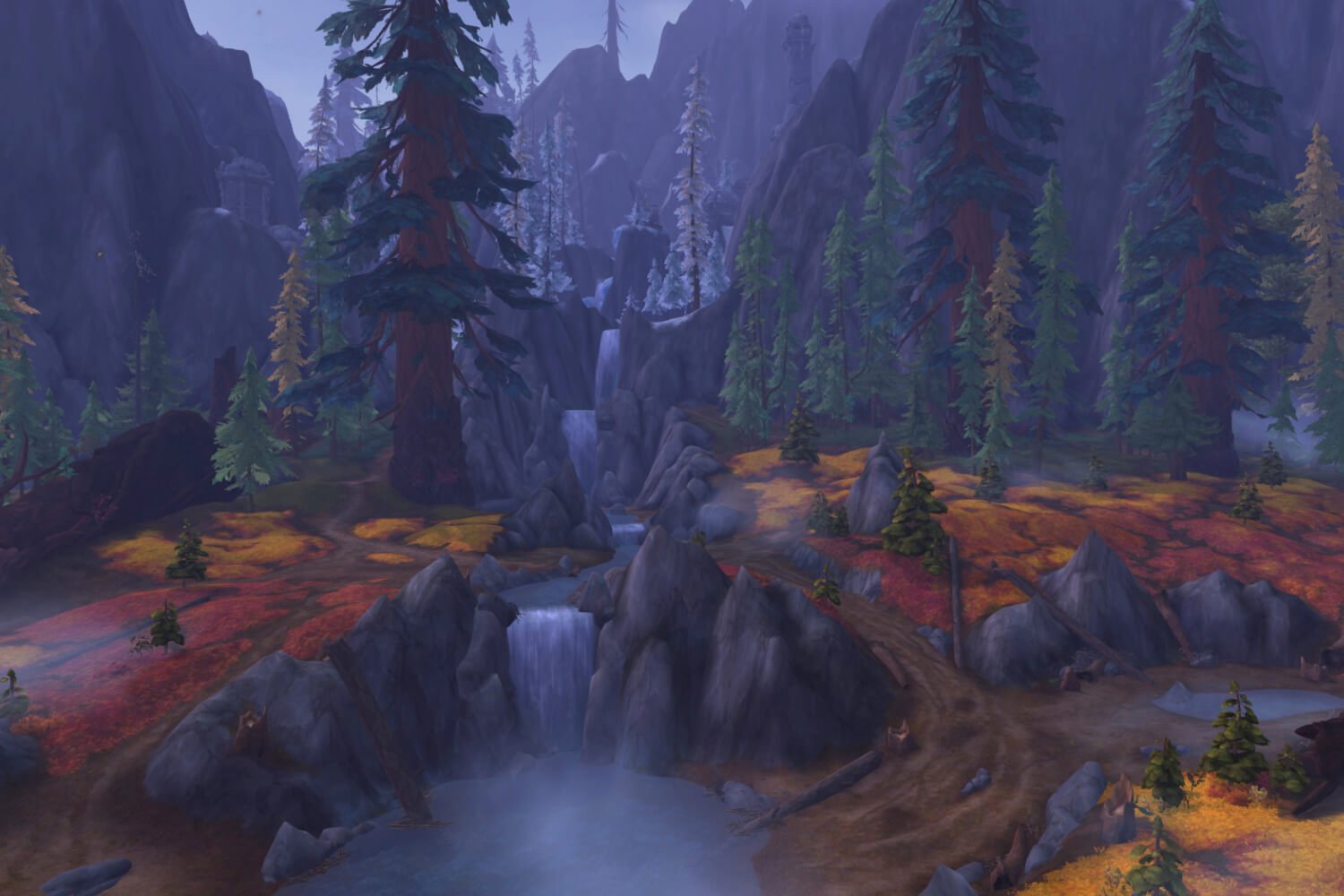 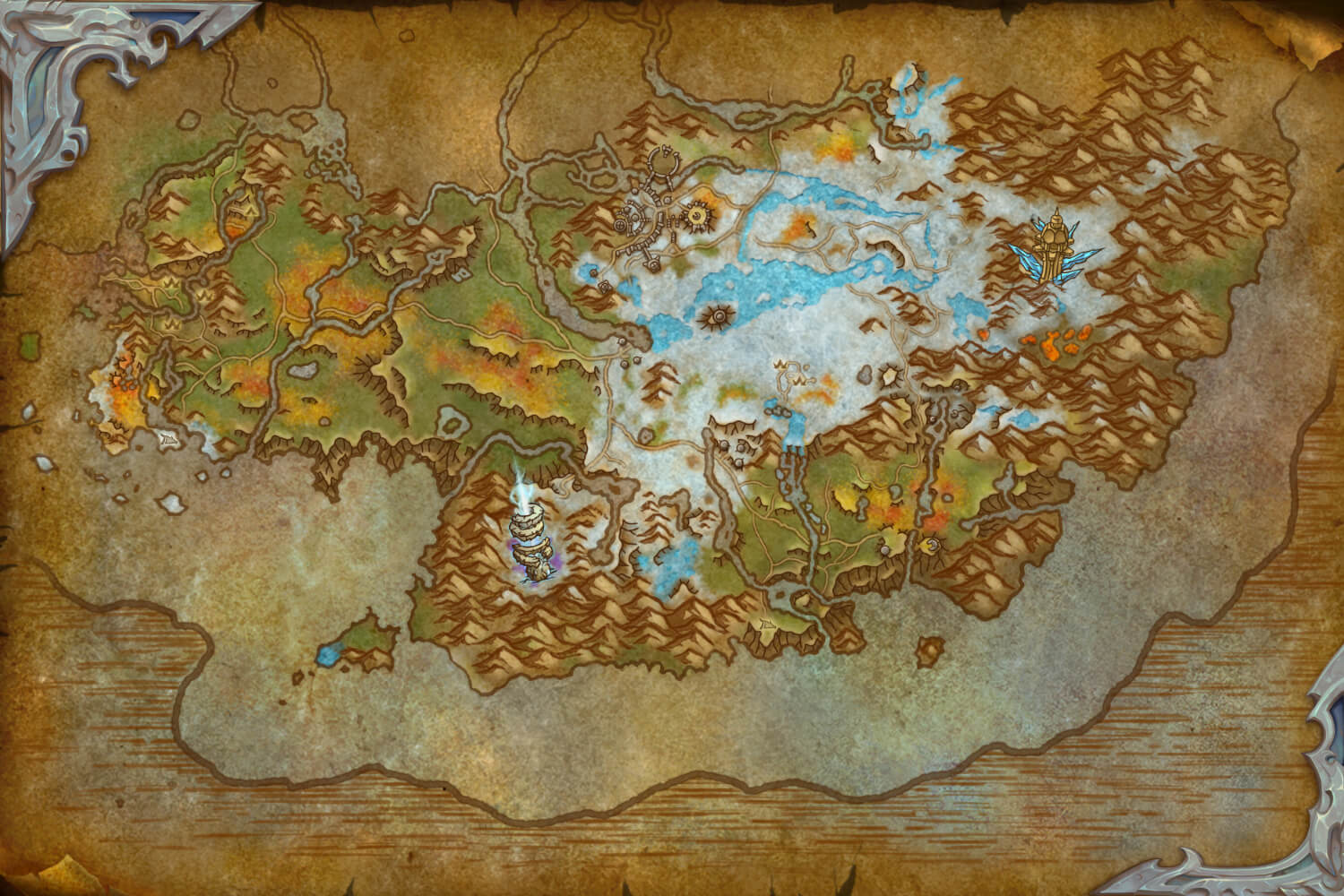 Azure Span is an immense zone. The developers noted that it's one of the largest zones they have created to date. But does the size really matter? Sure, but it also depends on the contents of the zone: if the zone is fun, the huge size is great. But when it's boring as hell... Well, we get a very extensive hell then. Luckily, this case is more of the former.
If you're a fan of Northrend, this zone will be a great nostalgia trip for you. It mostly resembles Girzzly Hills mixed up with Borean Tundra multiplied by the scale of Dragonblight. Probably it's not quite surprising that you will find some creatures here that we'd expect to be native to Northrend – tuskarr, the mighty warlus race. There will be a lot of story connected with their culture so get ready to catch some fish with your new tusky friends. You will learn lots of peculiar exotic recipes of the locals, enjoy a ride on a gigantic otter, and do lots of other fun things. The Iskaara Tuskarr faction will be your main ally in these cold lands.
But not just them. The blue dragonflight is quite common here too, so you will have a chance to learn more about this clan. Furbolgs and gnolls are also very wide-spread here and there are several exciting stories you will hear and play through. One of the dungeons in the Span is gnoll-themed: Brackenhide Hollow is the biggest settlement of aggressive dog-men in the Dragon Isles. You'll have to teach them a lesson! Another dungeon in the zone is the Azure Vault inhabited by less furry enemies and created by the infamous Maligos. 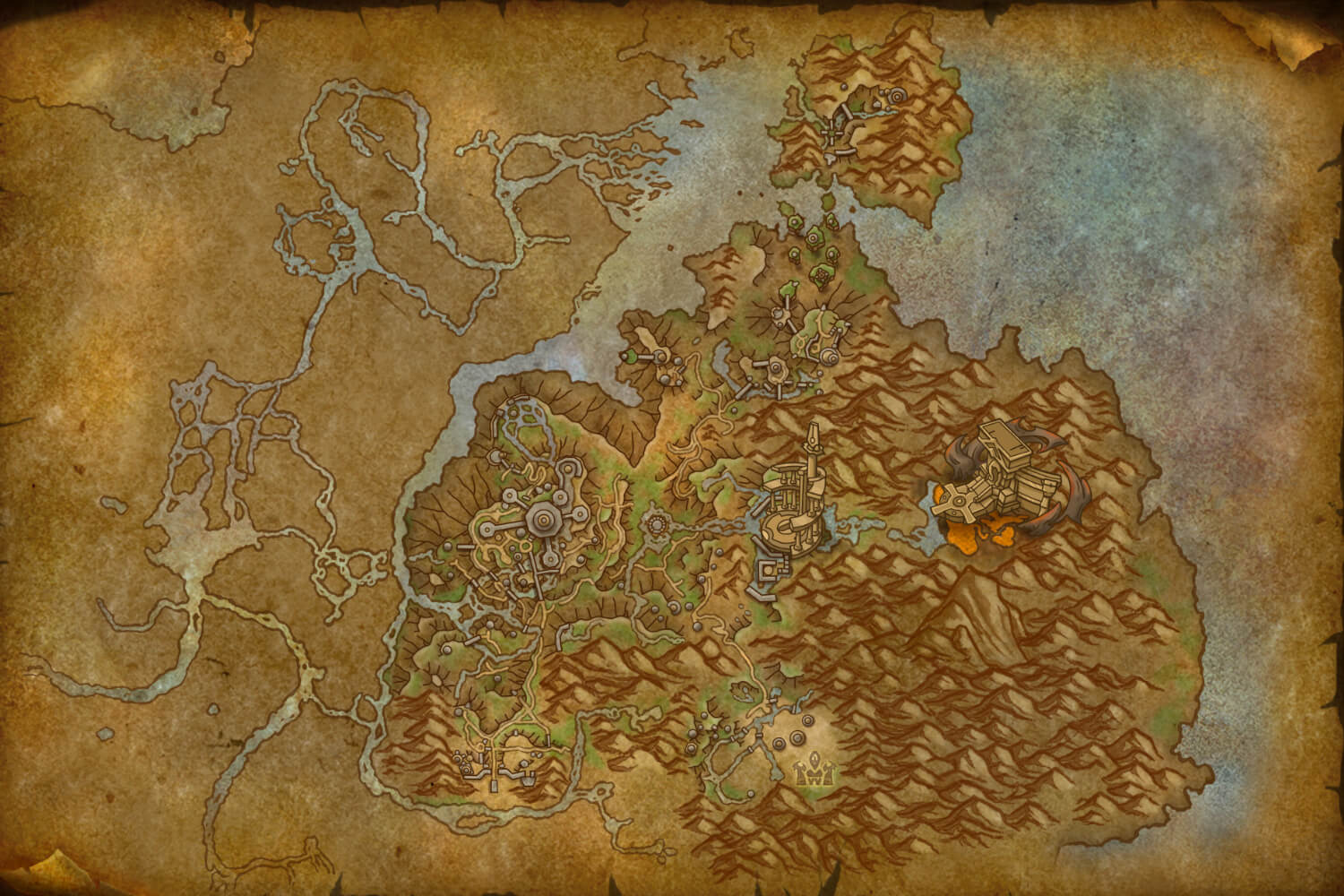 This place is serene and glorious. It has numerous man-made wonders to gaze at. Sorry, not really "man-" made, but rather "dragon-" and "titan-" made, of course. You will learn a lot about both races while questing there. The greatest dangerous that we will face on the Dragon Isles will start rearing their ugly heads here too. Lots of fun and a high degree of epicness are guaranteed.
Thaldraszus is where the seat of the aspects is located. You will interact with the most revered members of different dragonflights including very famous ones. Also, this is the place where the largest settlement of the expansion is situated – Valdrakken (more about it below). And not just that: the starter raid is also here, the Vault of the Incarnates. As well as 2 new dungeons: Algeth'ar Academy and Halls of Infusion. As you have already guessed, this will be the zone you'll be staying in longest at least before the first significant content update.

Valdrakken – Where your hearthstone is 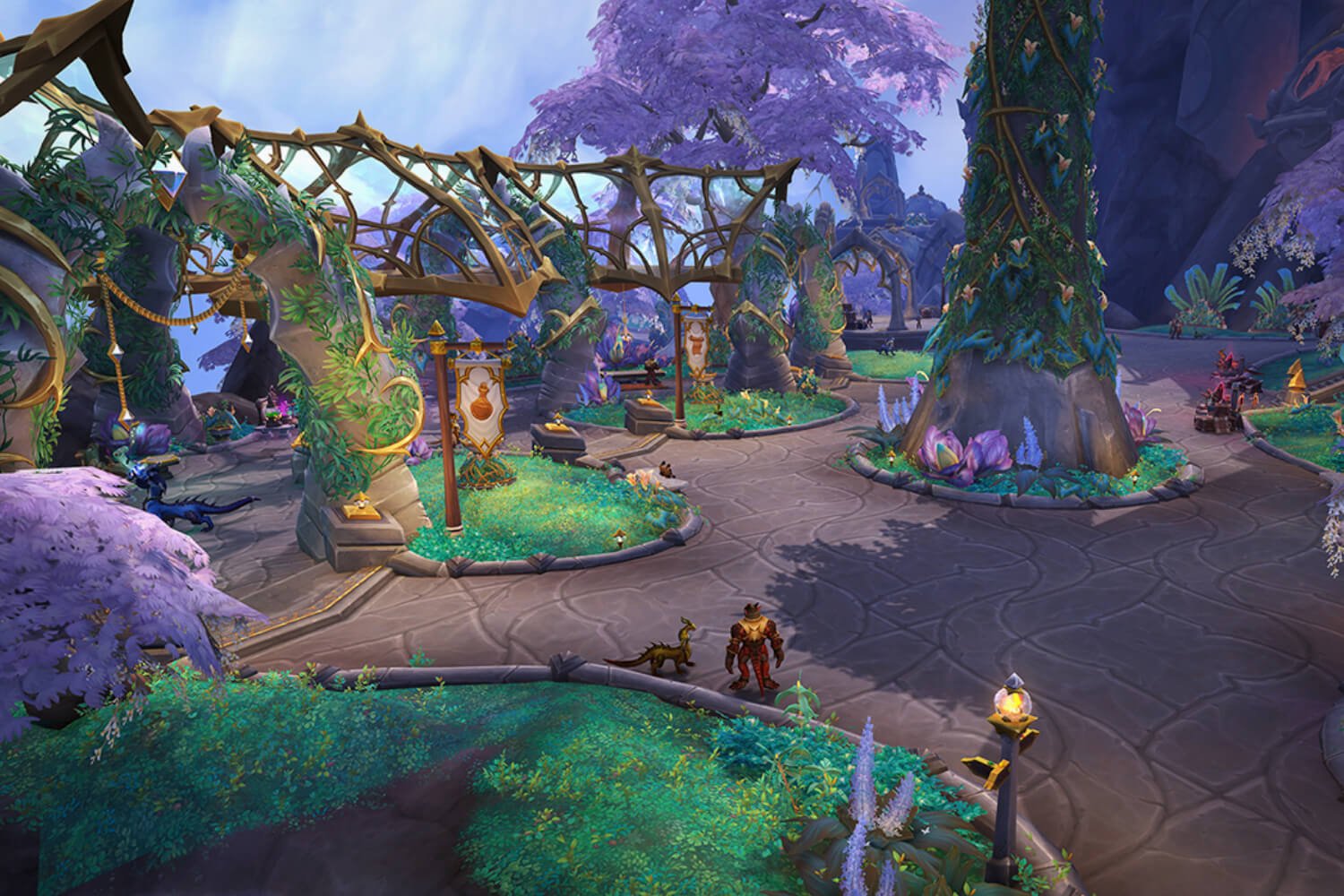 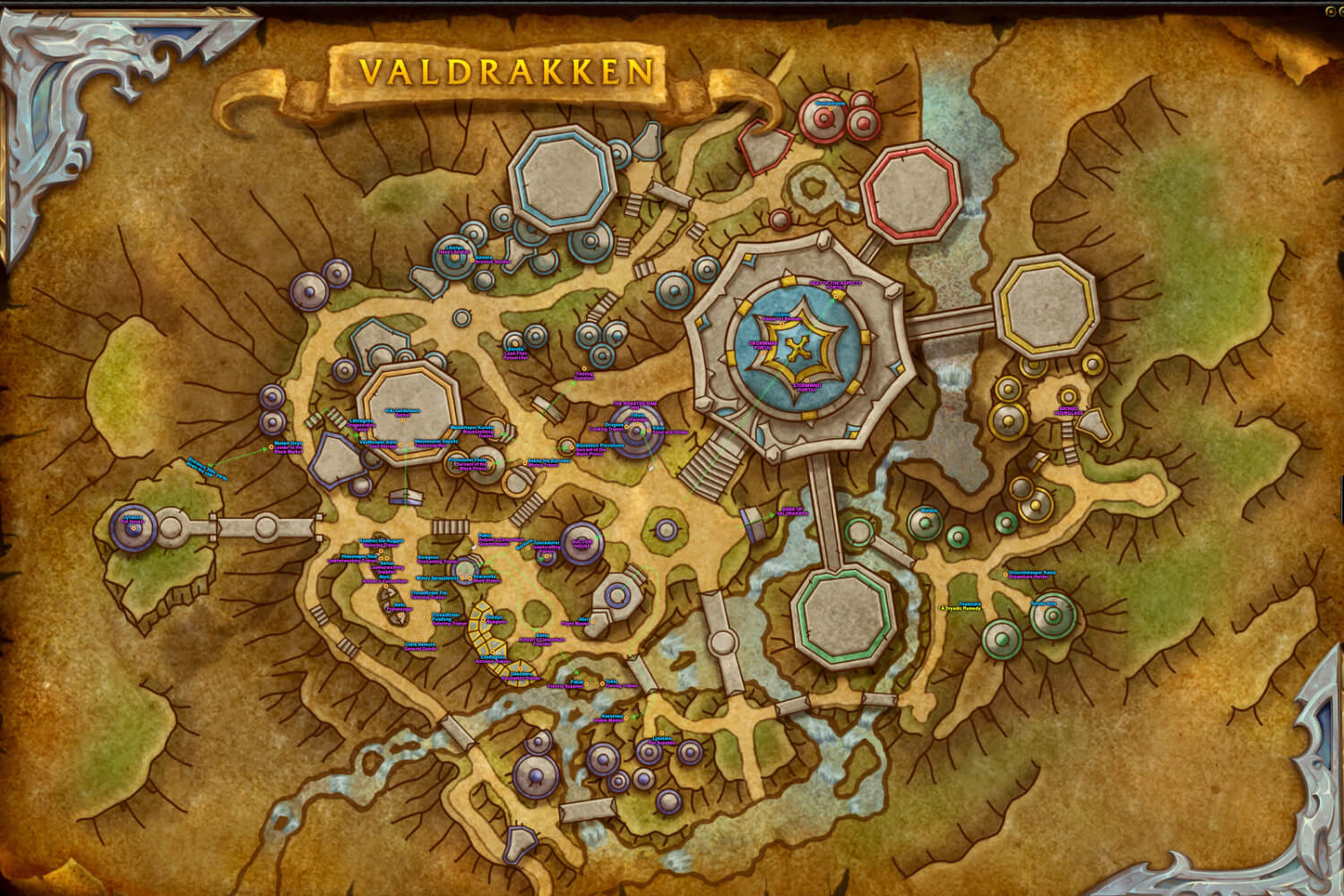 Not exactly a separate zone but we decided to dedicate a section of its own to the newest capital in the game. Unlike mostly lifeless Oribos, Valdrakken is a really pleasant and living place. It features some outstandingly beautiful parts like the library and the seat of the aspects. You will also have an opportunity to enjoy numerous vistas that the city offers in its highest districts.
There will be lots of interesting storylines here too. For example, there's a burning issue of who should become the new leader of the black dragonflight. Wrathion believes that it should be him. But he has rivals. You will help solve it in the way that suits most other aspects. And so on – there will be no shortage of interesting stories to follow in the heart of the dragon realm!
***
That's about it! So let's recap what zones we're going to have in the Dragonflight expansion: 4 zones to level through, 1 starter zone for dracthyrs, and 1 new capital. The zones will be quite large with many things going on in them and each of them will have its own aesthetics. Sounds cool, doesn't it?
If you need help with leveling up an alt through these vast places, we can help you with that! Great stories are awesome but when you have to hear them again and again they stop being great. Our professional player can take care of getting your character to the max level in no time. Check out our power leveling boost in the catalog! You can also contact us directly to learn more about it or Dragonflight zones, if you have any questions about them! We'll be happy to help you in either case!
View 70 Level Power Boost     Contact us
Share: Facebook Twitter