What the hell is Dragonriding? [WoW Dragonflight Guide]

All articles
One of the most highlighted features of the Dragonflight expansion, dragonriding, is not exactly the clearest one even to WoW veterans. We all have lots of mounts and love collecting them, that's true, but what's that all about with these special mounts that will only be usable in the Dragon Isles? And what about others? Will these special mounts will have some extra features? Damn, why can't we just get around the usual way!
This addition has definitely never been on any "we want this in the game" lists, at least in the community. That's why such a huge focus on it makes some of us confused. And it's absolutely okay. Before we test it in the game for some time, we won't have a clear idea of whether it's something fun or yet another junk activity that won't survive the next expansion's release. But first let's gather all the pieces of information we have about this thing to have a better understanding of what to expect from it. We'll cover what this activity is, how it works, what mounts are there, and what related systems and game modes exist. At the end of the blog post we'll give our own opinion on whether it looks like something promising or whether it's total meh.

What is dragonriding and how does it work?

After trying to entertain us with mediocre additional game modes like Torghast or Island Expeditions, Blizzard gave up and decided to change their approach. Why should we invent something, they though, if we can just enhance something that already is in the game? Like, mounts, you know. Everyone loves them. Perhaps we should do something about how players use them and move around?
Most likely that's how the idea of dragonriding came about. So it basically makes your moving around the new zones a more exciting and rewarding experience. Instead of just running from point A to point B, you now can calculate the most efficient trajectory to glide down from a cliff to your destination. "Efficient" means that if you pick the right angle and route, you'll get there faster than otherwise. And it works both for going down and up. You also get a couple of abilities that will help you with gaining speed or height, as well as an entire dedicated talent system. It's not exactly vast but it offers relevant upgrades that will make your moving around better. Naturally, no regular flying mount will give you that even if Blizzard let you use them in the Dragon Isles. So here's a video by SoulSoBreezy for you to get an idea of what it all looks like: 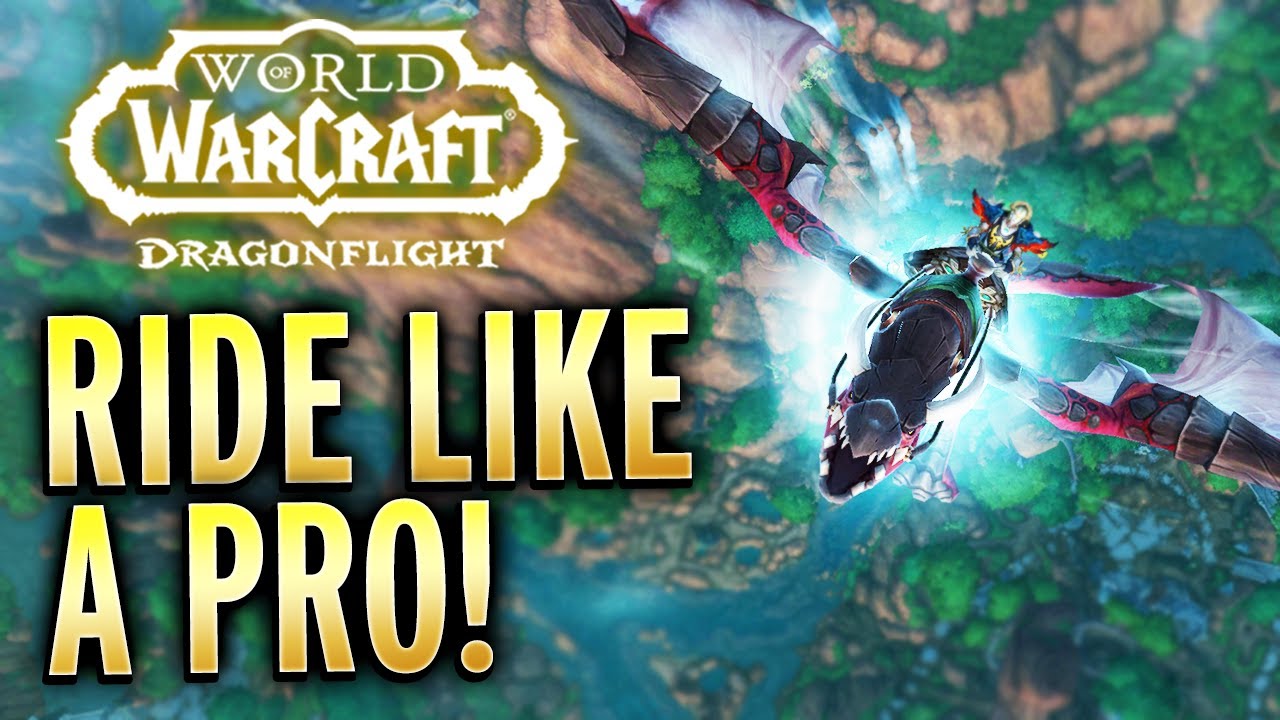 The resource you're going to use for dragonriding is Vigor. Your dragon riding abilities consume it when used. They mainly help you speed up and ascend faster. With the help of talents and leveling up your dragonriding skill, you'll get more skills and more vigor, so you'll keep getting more ways to fly your dragon.
Dragonriding is not only about how you move. It's also about what you move on, how it makes difference, and what you can do with this, well, moving. Let's break it down: what you move on is about your mount. As you have already guessed, there's a set of special mounts for you to use in the Dragon Isles. We'll discuss them in the dedicated section below. Not only they are your new means of transport, they are also another vanity display as they can be customized. Some customizations come as rewards for certain achievements. So it's a new way for you to show them off.
As to that complicated part: "what you can do with this moving" – it's way easier than it seems. So far moving in WoW was mainly about getting from one point to another to participate in some activity. It was also important in high-end activities like raids, dungeons, or arena – positioning your character correctly during a fight made lots of difference. In Dragonflight Blizzard decided to create an entire game mode around flying on a dragon – dragon racing. So you will now be able to spend more time with just that – moving around effectively. It will involve high speed and lots of focus, of course, but the rewards will be worth it. There's also another semi-activity: collecting dragon glyphs that unlock new talents. It doesn't really have much content but it's fun too: you need to locate glyphs and find a way to get to them. If the devs decide to build on that, at some point we might get "dragonriding puzzles". But that's future. First let's discuss the present.

What dragons are there?

There are 4 highly-customizable dragons of different types. The Renewed Proto-Drake (basically, a proto drake with a beak... and teeth?), the WIndborne Velocidrake (pterodactyl), the Highland Drake (regular dragon), and the Cliffside Wylderdrake (wyvern). Each of them has a set of unique customization options... and that's it actually. None of them has some particular advantage over the others. It's just the looks.
To unlock each of those dragons you need to complete a particular zone's storyline. Here's how the dragons are related to the zones: 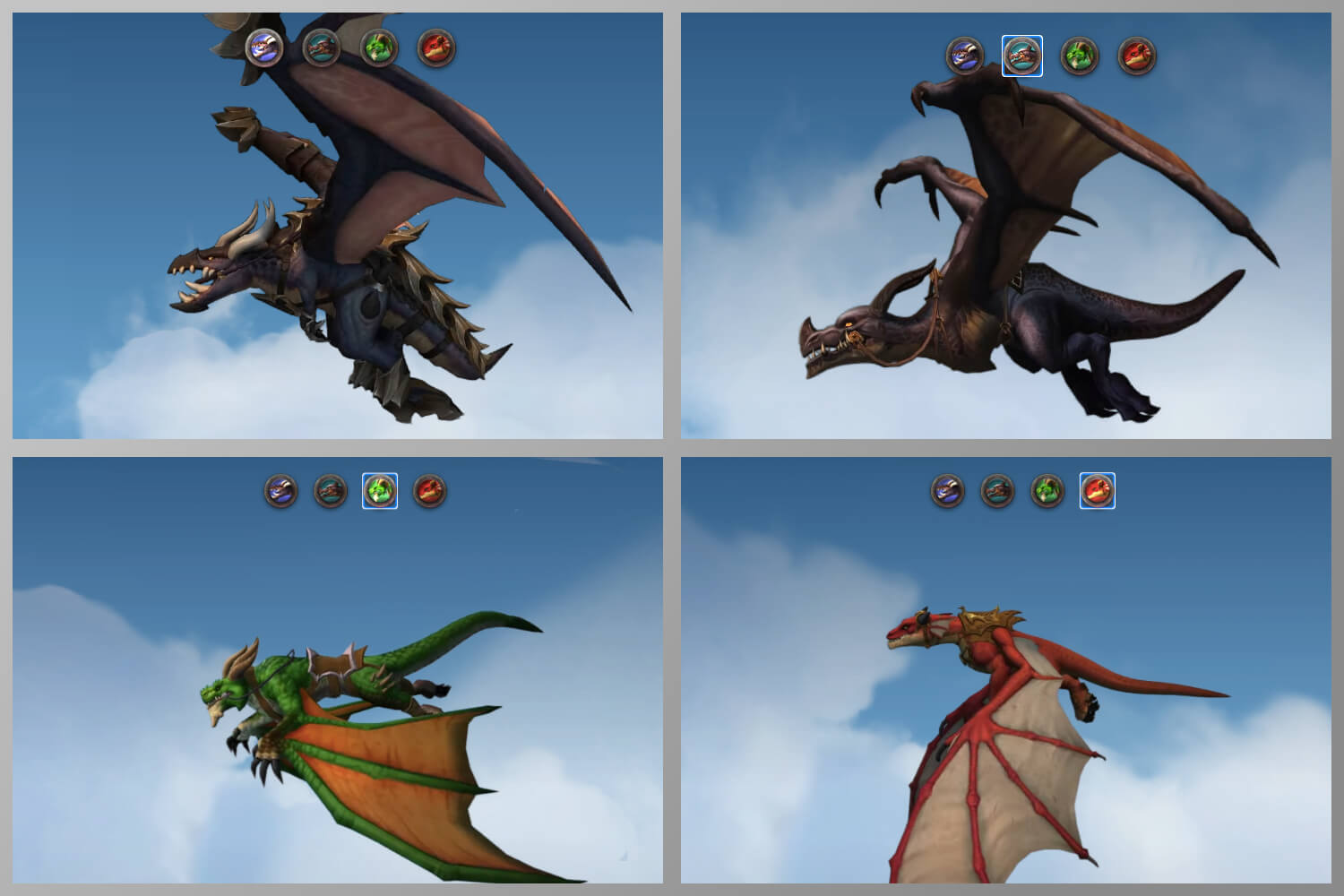 You will not miss them as each of them has a dedicated achievement. Just check your Quests > Dragonflight section in the achievements to see your current progress in each zone.

What talents are there?

Talents make your dragonriding experience better in every way. You get new abilities, you spend less vigor, you can fly up longer and faster, and so on. In total, there are 15 talents – you can check them out in the dedicated window in the Dragon Isles Summary (close to mini map). Some rows of talents have several options and you can only choose one of them. So there won't be a situation when you have maxed out everything in the talent tree – there are some choice involved too, which is great. Here's a video by Towelliee in which he takes a deep dive into the system and explains which talents do what: 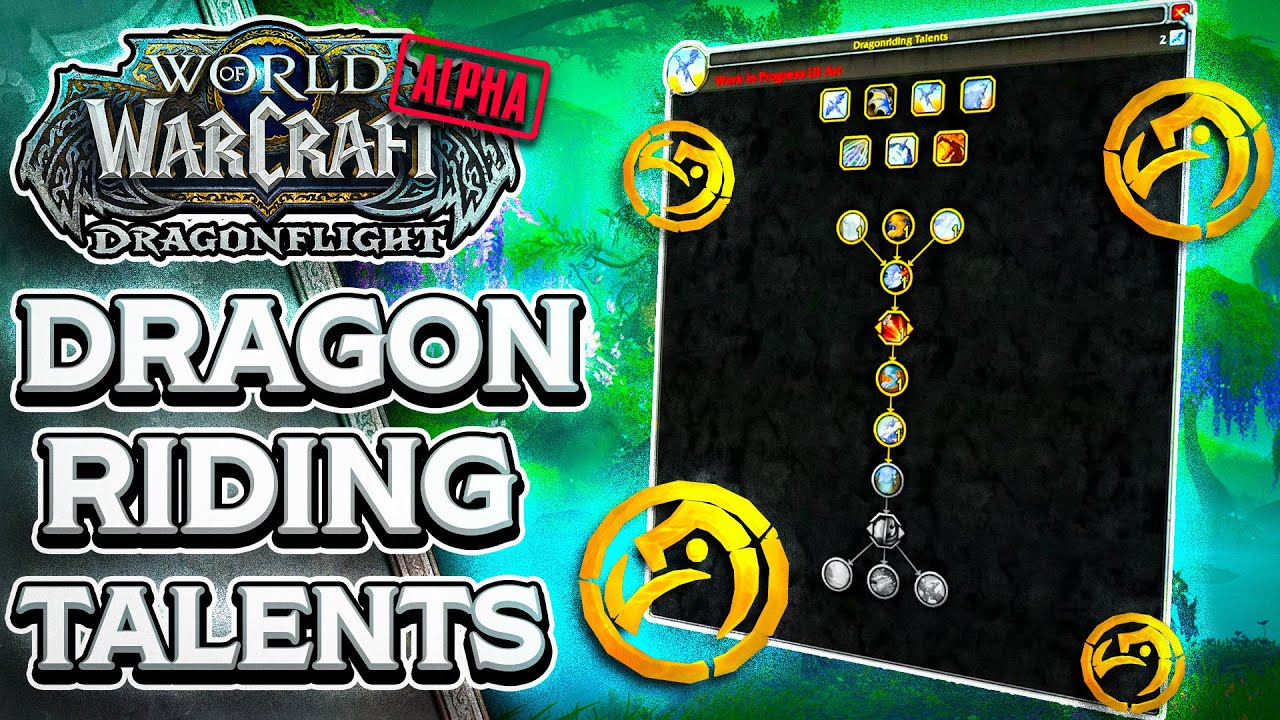 To unlock talents you need to collect Dragon Glyphs. You can find them all across the Dragon Isles and you need to use your dragon to get to them. Sometimes it's harder than it seems. Each talent costs a certain amount of glyphs – it's not always the same so make sure to check how many glyphs you need to unlock a particular talent. There are 48 glyphs in total and the community has already found them all (of course!). Here's Sings of Kelani's video on how to collect them all: 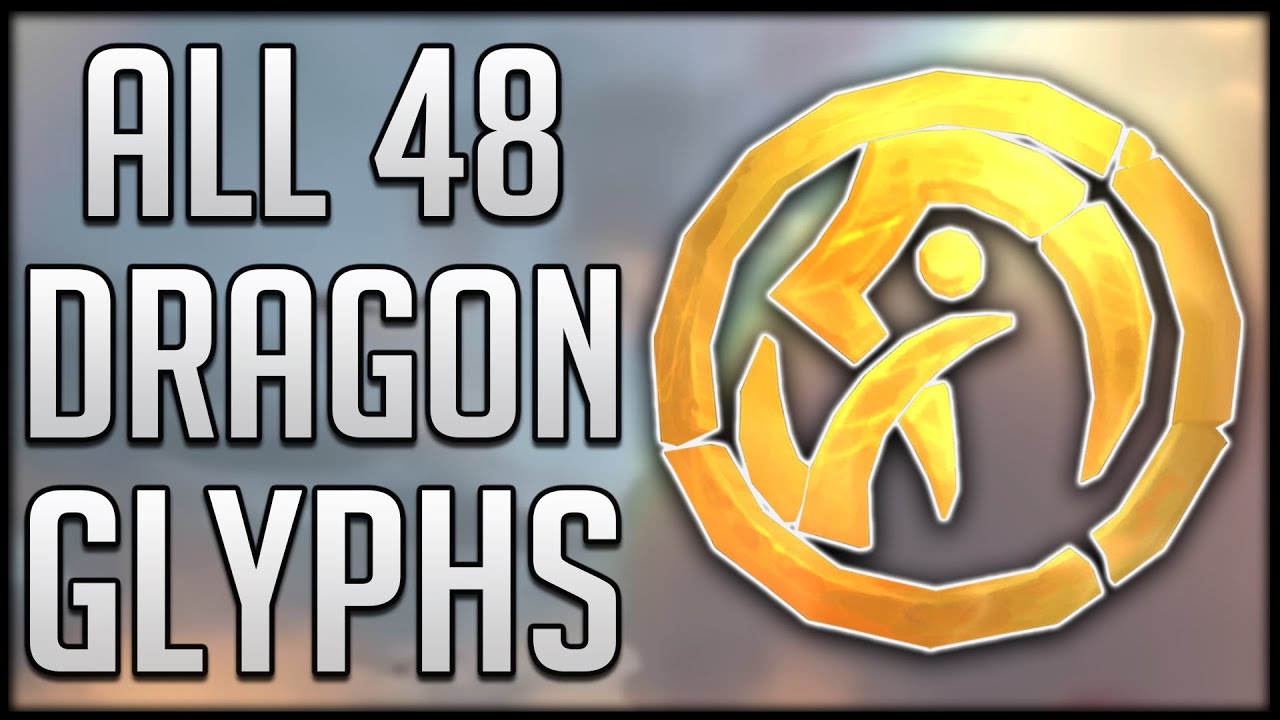 As usual, we can help you with both leveling through the dragonriding progress system and collecting glyphs (which is basically a part of the former). So feel free to check out our respective boosting services: dragonriding full boost and dragon glyphs boost.

What is dragon racing? 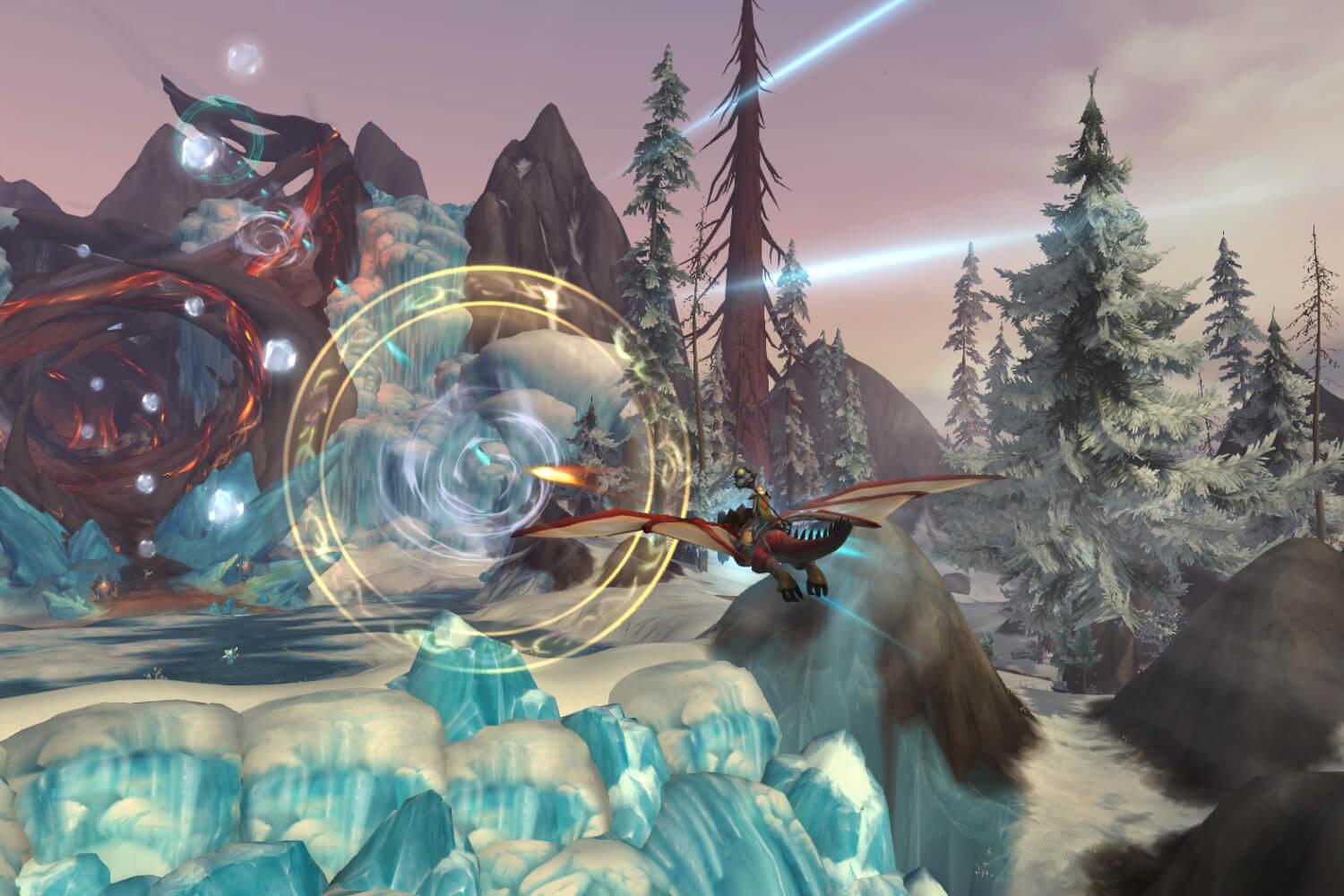 Dragon racing is the first standalone activity that has dragonriding at its core. The idea is pretty simple: you have a route that you have to complete as fast as possible. To help you stick to the course there will be lots of circles you'll need to go through. You are free to use your dragonriding abilities as much as you want. You'll also find special power-ups along the way – mostly speed boosts. So the faster you do all that, the better medal you get.
There are 2 difficulties for racing: regular and advanced. Completing a race with a medal rewards you with a new customization feature for one of your four dragons. Complete them all gets you even more rewards: a title, a pet, and a transmog shoulder item.
To give you a better idea of what it all looks like, here's a great video of earning a gold medal in one of the courses by BigHeroSixy: 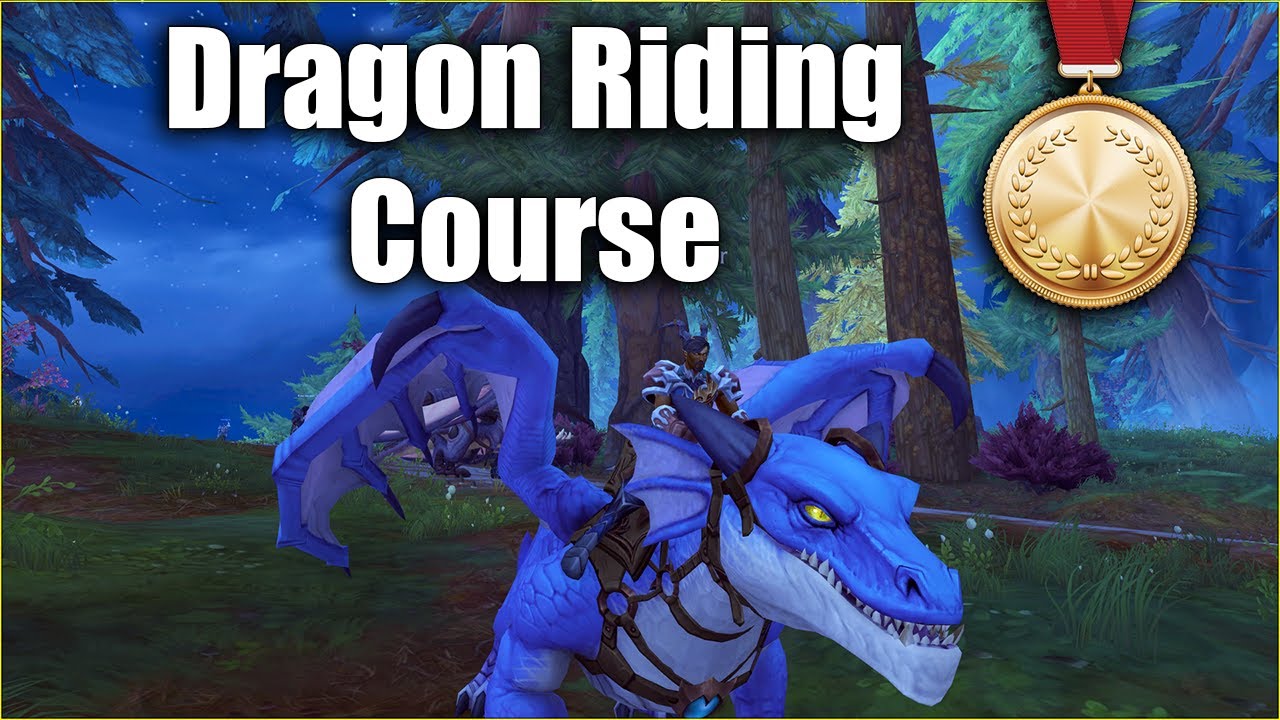 Don't expect it to be too easy to complete all those races with a gold medal. In fact, it takes lots of practice at a particular track to master it and finish it faster than usual. If you're not a fan of this activity and just want to get the rewards, we can help you with that. Check out our dragon racing boost to learn more!
***
All in all, dragonriding looks like an unusual addition to the game. It's hard to say that all this stuff is what an MMORPG needs but time will tell if that's a smart move by Blizzard. One thing is clear – it makes just moving around the map a more exciting and fun thing. So we don't see how this can be bad! But can it really be the main feature of an entire expansion as Blizzard have tried to make it look like? Well, this is less clear.
Leveling your dragonriding skill and collecting customization options for your dragons is not going to be too easy! Some parts of this journey will take lots of time, others – lots of effort. So if you want to speed things up and get the best rewards this activity has fast, consider getting some help from professional players! Our team is full of skilful dragon riders, so we will definitely find someone who's the right pro for your task!
View Dragonriding boosts     Contact us
Share: Facebook Twitter