All articles
WoW WotLK goes live on September 26, while its pre-patch is expected to get released a month before that – August 30. That means that all Classic TBC fans will soon find themselves in Northrend, since the Outland has no more new stories to tell. To make it easier for you to understand what to expect from the adventure to the North, let's take a closer look at things that make WotLK different from the Burning Crusade. 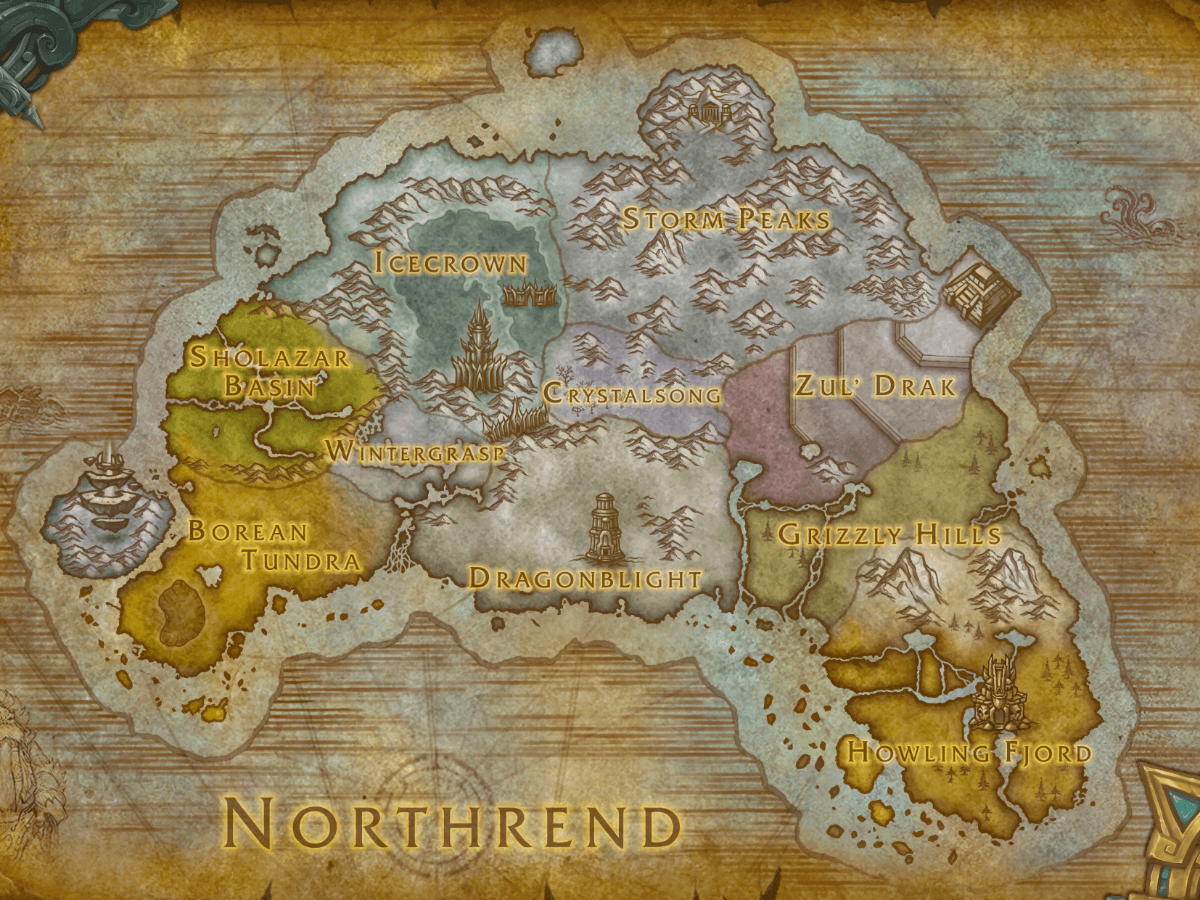 Northrend became the new place "where everything was happening". Unlike the Outland that was a part of the main events only at the beginning of the Burning Crusade expansion, Northrend kept us entertained throughout the expansion. After we've dealt with Illidan in the Black Temple (that was literally the first content patch of TBC), we went back to Azeroth to venture into Zul'Aman and Sunwell Plateau. In WotLK we'll have everything happening right on the Northern continent: Ulduar, Trial of the Crusader, Icecrown Citadel, and, as a short outro, Ruby Sanctum. We'll only have to make a short voyage to Kalimdor's Dustwallow Marsh to witness Onyxia's comeback.
With the new continent we'll get new factions, new dungeons, and new raids. They will all deliver a more coherent and exciting story than that of the Burning Crusade. There will be a new neutral capital – following the success of Shattrath's concept, both factions will find a hub for all their operations in the floating city of Dalaran.

Yes, the regular stuff: level cap increased in 10 more points. The same way it happened with any other expansion, whether you’re a fan of it or not (with the notable expansion of Cataclysm and Mists of Pandaria that added 5 levels each). Naturally, it wasn’t just about character levels: item levels increased as well.

The journey you had to take from level 70 to level 80 was a really lengthy one. Imagine having to deal with about 8 zones instead of what we’re used to know (3-4 zones max). Yes, you didn’t have to get through all of them back then, but your road to the cap level was still longer and less guided than in recent expansions. If you’re not enthusiastic about spending your time on another 10-level chore, you can always order a power leveling service – with it we’ll take care of your character’s leveling! 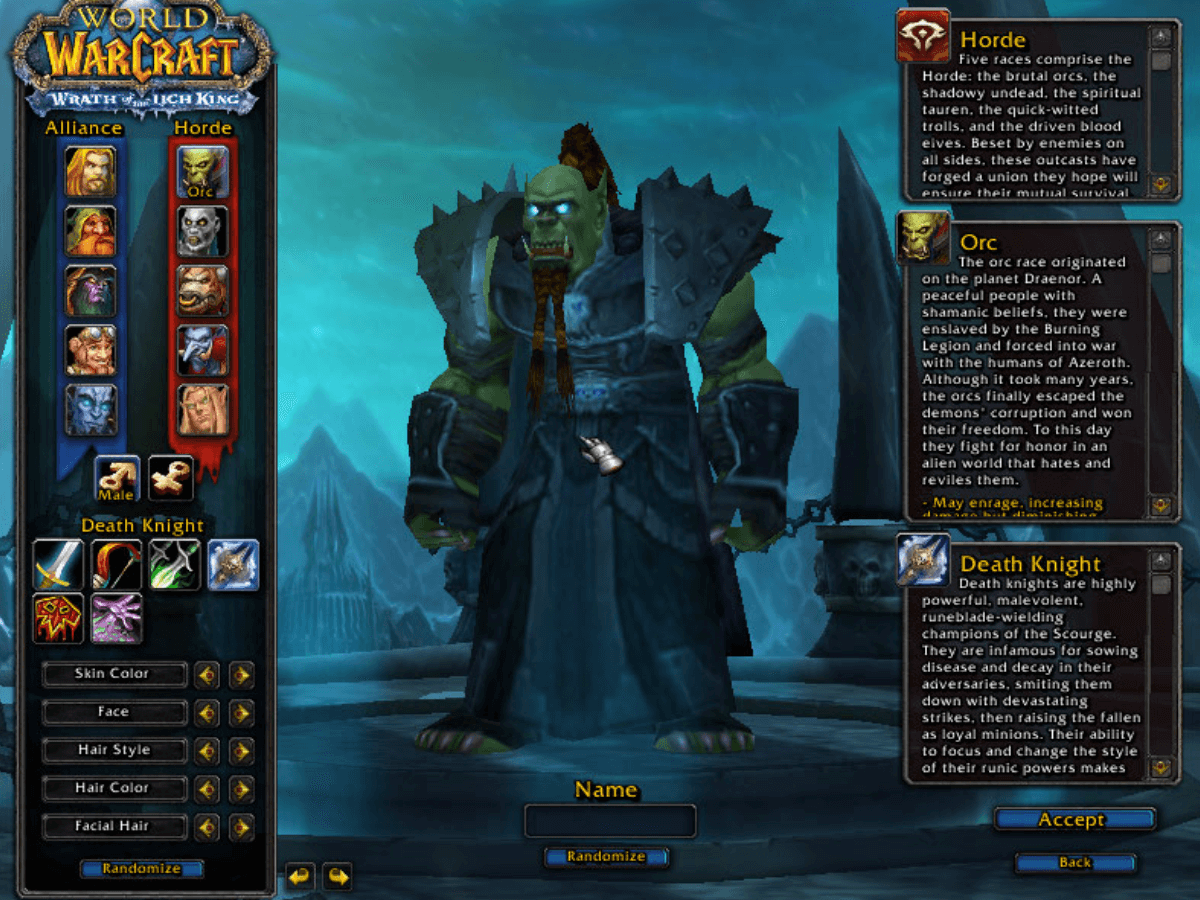 When the Death Knight class was announced, everyone was puzzled. Blizzard made it clear that it was different from all the others in some way, it was "heroic". But what the hell did that even mean? Was it supposed to be overpowered by design? Or did it have some unique activities or rewards?
Well, as it turned out, the biggest "heroicness" of it was that your DK character started at level 55 instead of 1 and had a unique introduction quest line. Other than that, there was nothing special about it: it had 3 talent trees, 2 specs (melee DPS and tank), it wore plate (like warrior or paladin), and used its own kind of resource (runes which had some similarities with rogue's system). Yeah, it also had its class mount but it wasn't new either: warlocks and paladins had had theirs for 2 expansions by then.
It doesn't mean that death knight sucked. No, it was the first new class the game got since its initial release and it was refreshing to see an addition to the roster. And at first death knight was really overpowered, so it's safe to say that it lived up to the hype. That also made it rather notorious and hated – everyone played it, it was stronger than most other classes, and took less skill to master. The noob class, so to speak. Thankfully, this title later passed to demon hunter.
By the way, leveling your death knight from level 55 to 80 is not an easy task. If you need some help with it, we can give you a decent speed-up with our dedicated death knight power leveling.
See Death Knight power leveling 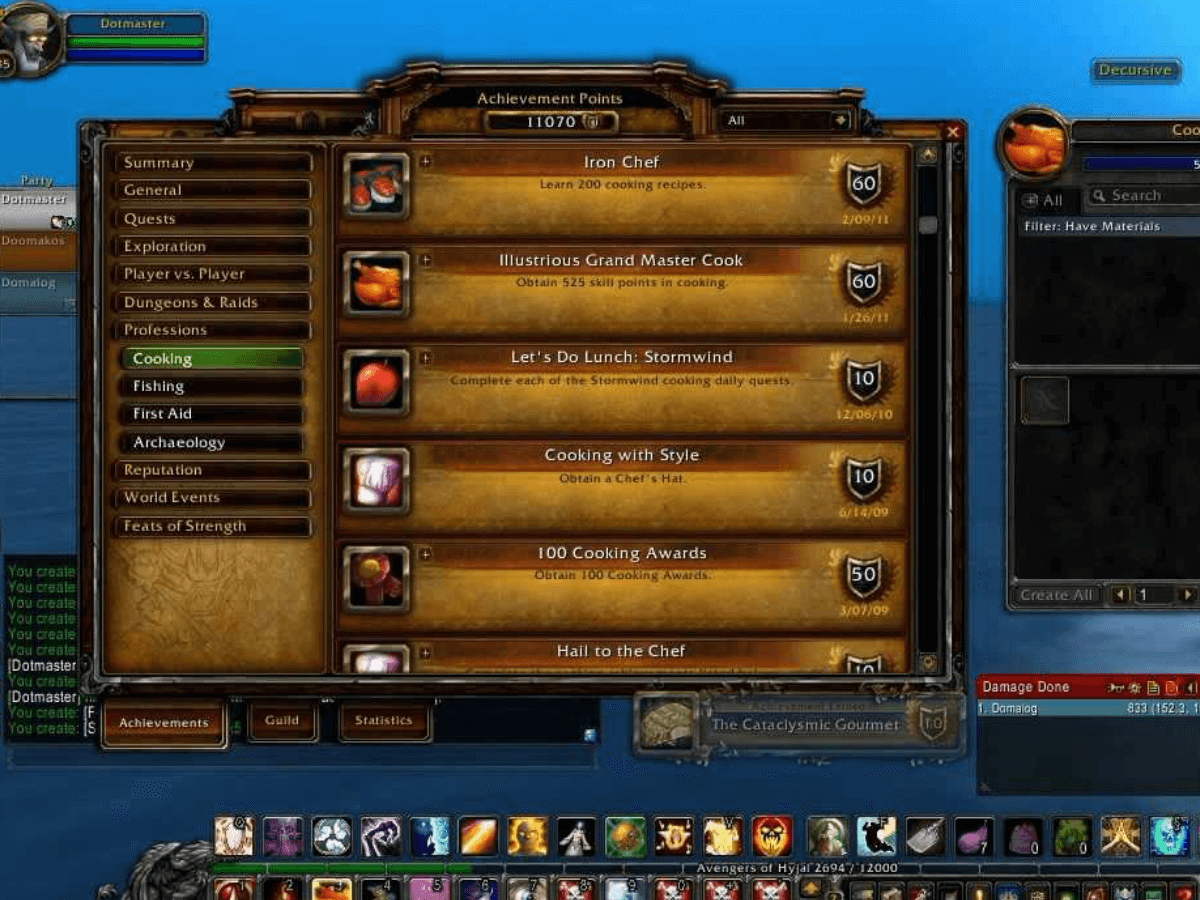 Yes, shocking – achievements haven't always been a part of the game. Now it's almost impossible to imagine it without them. Why would you care to complete dungeons in the hard mode if that doesn't even yield you an achievement, let alone mount? Achievements brought more sense to what we were doing in World of Warcraft. Now almost any step you made took you closer to getting some trophy. And the feeling of accomplishment that you get when you finally receive it – oh, that is hard to beat.
WoW was one of the first big games that adopted this kind of system. It was very successful and most games Blizzard have released after it, had this system too. Naturally, if you ever find yourself stuck with another achievement, you can be sure to find some help in our shop. If you already have a specific request, you can just contact us and inquire about it.
Contact us 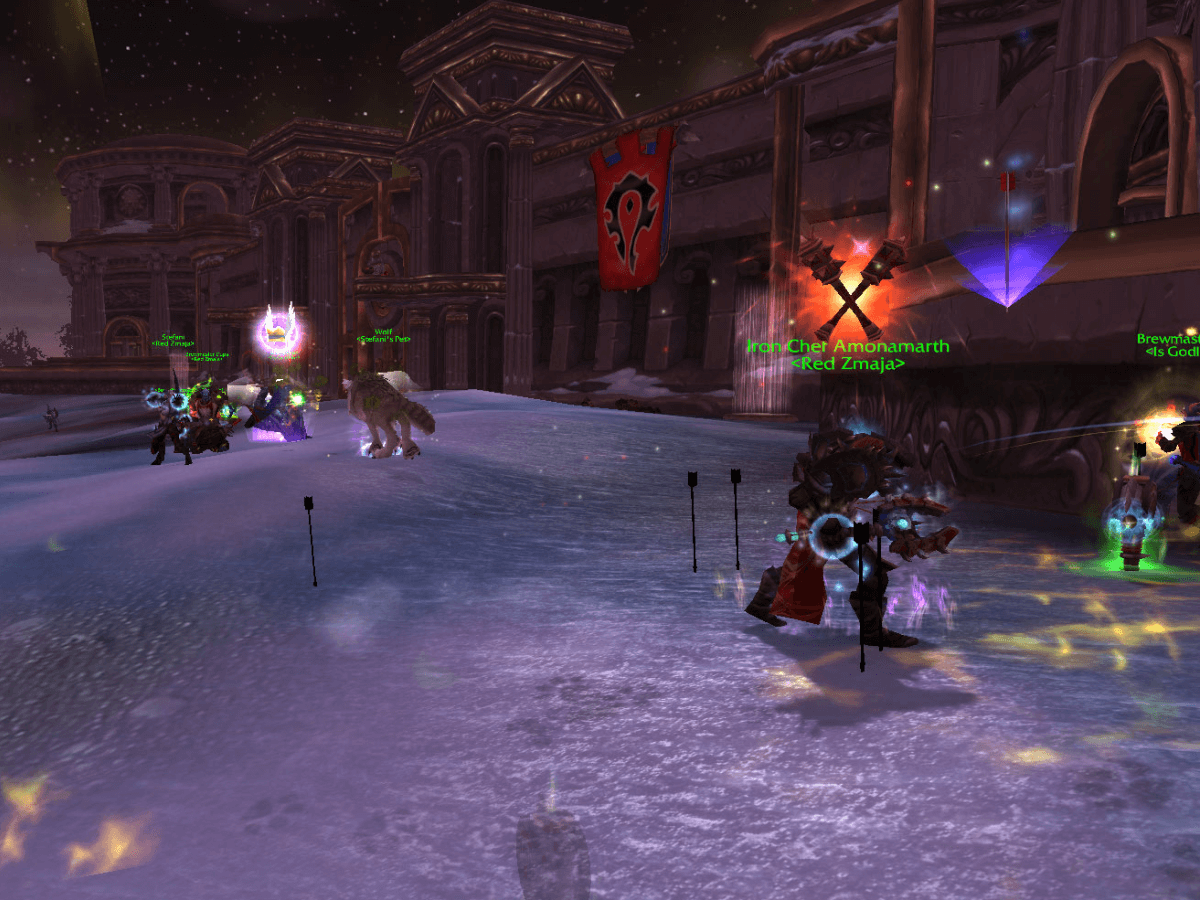 The Outland had some PvP activities in almost every zone. We all remember towers in Hellfire Peninsula and Terrokar Forest, Halaa town in Nagrand, and others. WotLK has changed that and created a dedicated zone for that. Thus the game made it easier for PvE fans to quest and gather mats peacefully in most zones, while PvP enthusiasts had a place to settle scores in. Sounds good, right? Many players, however, consider that decision a fatal mistake that finished off outdoor PvP in WoW.
The only atavism of the TBC approach could be found in the Grizzly Hills but it wasn't really popular. And it wasn't very common for Blizzard to add outdoor PvP activities to regular zones after that. Wintergrasp – the zone dedicated to the world PvP – became a huge inspiration for the developers and they have recreated it in further expansions: Tol Barad in Cataclysm, Timeless Isle in Mists of Pandaria, Ashran in Warlords of Draenor, etc..

Now all raids had 2 sizes: 10- and 25-people. Depending on your guild's roster, you could choose either. Later in the expansion we also got raid difficulties: you could choose to complete a raid in Normal or Heroic difficulty – the latter was harder, of course. Some say that this standardization of raids made them worse in the long run. Perhaps, in some way it did. But it's also obvious that raids became more accessible. They used to be all very different: smaller raids required smaller teams, but those smaller teams couldn't progress in bigger raids since they required bigger teams. Makes sense, right? But it wasn't very convenient, to put it mildly. Now every raid could be done in the way the guild wanted.
The difficulty went down to – 10-people Normal raids were significantly easier than most Classic and TBC raids. But that still wasn't nowhere near the LFR difficulty that we have today. Hence, most players were missing out! If you don't want to miss out on WotLK raids, you can just consider joining our team for a raid run right now!
See Raid carries in WotLK

Just as the title says, Heroic dungeons became easier to explore. In TBC you had to first purchase a reputation-gated key from a respective vendor. Only after that you gained the ability to run Heroic dungeons. In WotLK this was removed: you could start doing Heroic dungeons right after you’ve hit 80 lvl. That didn’t mean that you’d easily complete them though. You still had to gear up before starting your Heroic dungeons adventure.
If you need a strong group to accompany you during your Heroic dungeon runs, you know whom to get in touch with! We have plenty of dungeons-related services – deal with the hardest WotLK 5-ppl challenges with our help!
See Dungeon carries in WotLK

Hard to believe that it wasn’t in the game at some point, right? Before the dual specialization was introduced, players had to reset their talents each time they changed role. Sometimes it was even worth creating a new character of the same class just to specialialize it in different talents. That was usually the case with hybrid characters like druids and paladins.
WotLK made it possible to have 2 specs pre-set. You could switch between them keeping them both intact during the change. But that was that actually. It still wasn’t enough to make role switching accessible and mainstream. That will happen later, but this was the first step in the right direction. 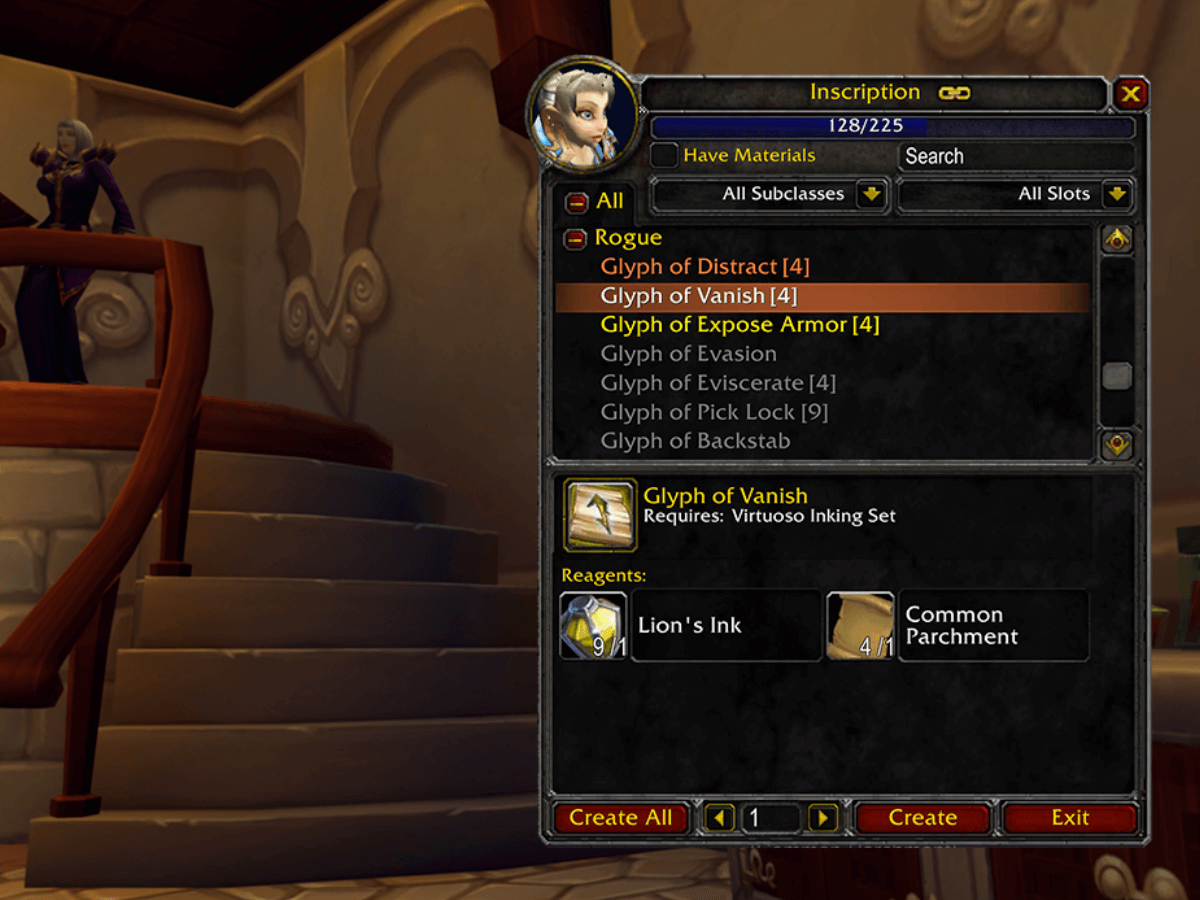 It wasn’t just about the new profession, it was also about the new system that was somewhat similar to talents. You had several glyph slots that you could fill with various combat-related and cosmetic effects. Inscriptors were the guys who created those glyphs. They also had an additional profession “milling” that helped them turn herbs into mats. Inscription was the last crafting profession added to the game and the second to last in general. The only new profession addition will happen in the Cataclysm expansion – that will be archeology.
If you need some help with leveling up your inscription skill, you can always turn to us for little help. We’ll make it easier for you to reach the skill cap – that will be fast and absolutely effortless for you!
See Professions Boost in WotLK 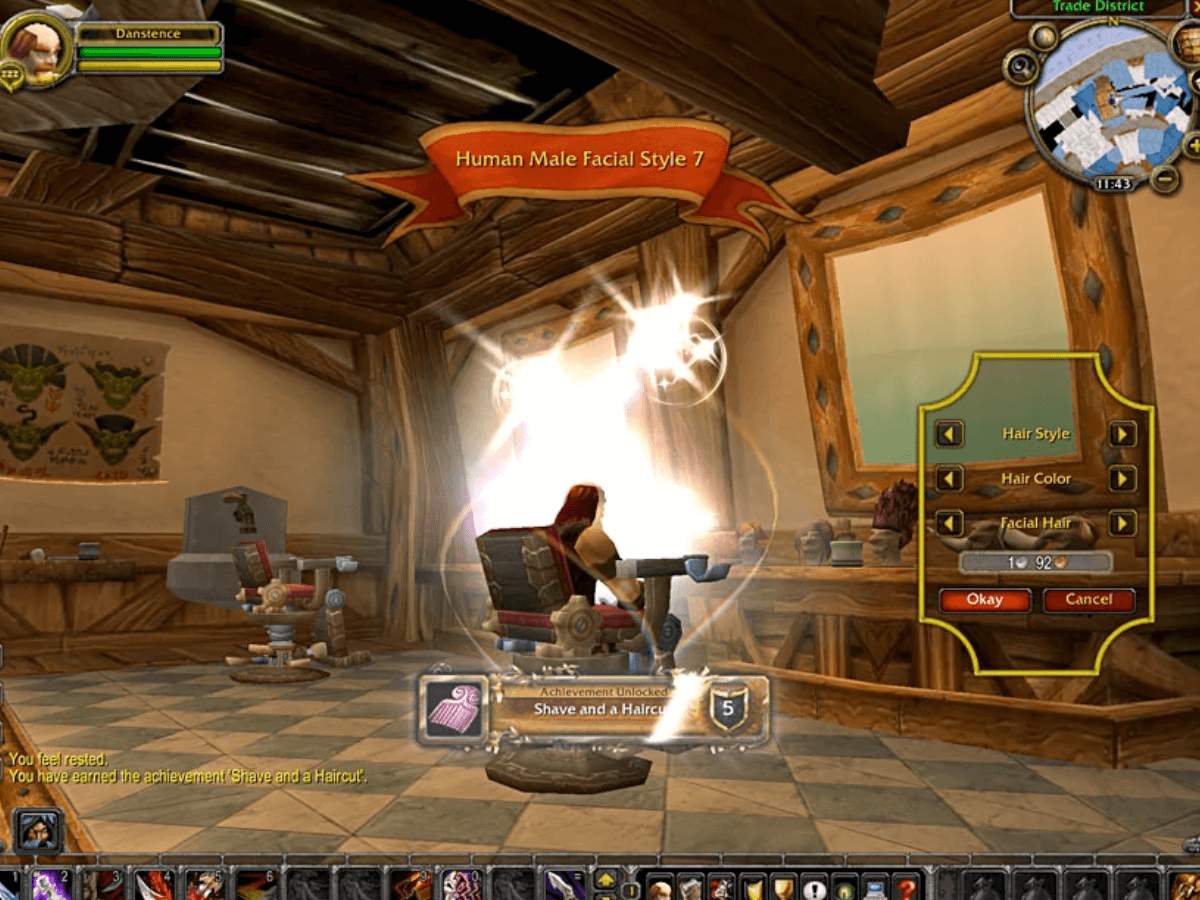 Another surprise: this customization tool hadn't been a part of the game up until WotLK. Even when it was added to the game, it didn’t apply to all the character’s features – it was mainly just hairstyles and beards/moustache. If you wanted to change face, skin color, gender, etc – you had to purchase the dedicated paid service.  However, it was a huge step forward in comparison to TBC and Vanilla: you had at least some post-creation character customization. In WotLK Classic you are supposed to have even more than that: for the rerelease version Blizzard made barbershops as versatile as they are in the retail WoW. That means you can change any trait of your character, including skin color, face expression, and gender.
***
Those are 10 important changes that make WotLK different from TBC. In our opinion, they are the most noticeable ones. They won't make your WoW experience completely different, but they will definitely shake things up a little and add some quality-of-life improvements.
If you want to learn more about any of them or if you need some help in WoW WotLK, feel free to get in touch with us! We're available 24/7 and will be happy to answer your questions!
Contact us      See WotLK services