Top-5 Best sets of the Vault of the Incarnates

All articles
Among numerous recent decisions made by Blizzard, hardly many have been met with such approval of the community as the return of class sets. Their absence left a burning hole in the aesthetics of raids and classes. Warlocks and priests had the same-looking gear since the first raid of the BFA (Uldum) and all the way to the second raid of Shadowlands (Sanctum of Domination).
It didn't take the devs long to realize that the removal was a mistake and class sets had their first appearance after the break in the last raid of the SL expansion, Sepulcher of the First Ones. Vault of the Incarnates, the starter raid of Dragonflight, will feature class sets too. Today we decided to take a closer look at the best sets of the upcoming tier and rank them from the least to most impressive. Let's begin!

This is not the first time we see a mage set adorned with crystals. They get some minerals on their shoulders and helmets every once in a while. This time, however, that's not just a decoration, that's the essential part of the set. It has this ethereal vibe that comes from the colors and the covered face. Some savageness is added to it with those fangs on the belt and gloves. Looks great. The only thing we might not be too sure about is the boots. Why do they have this open part in the front? Hopefully, Blizzard will fix that. Otherwise, it's really good.
Speaking of possible inspirations among previous mage sets, this one looks like a beautiful child of tier 7 and tier 8. Tier 7 (WotLK Naxxramas & Obsidian Sanctum) had a set of the similar purple color. It was a revamped version of a tier 3 and quite a good one (in comparison to many others at least). Tier 8's set (Ulduar) was the first one to feature pants for mages and it looked more like mail/plate than cloth which was a welcome instance of variety for casters. The current mage set looks even more plate-ish that tier 8, so it's even more badass in that regard.

HUNTER – Dragon or bird of prey?

Hunters have had some poor animal's scull for their helmet since tier 2 (Blackwing Liar) so another instance of it is not surprising at all. It's not a bad thing, it all depends on how well it's incorporated into the wider picture. This set is more or less balanced in that regard. The only question is what kind of creature was killed for it? Is it a bird? Is it a pla... dragon? Something in the middle, we guess. Anyway, a reat set overall with lots of things going on but not standing in each other's way.
As for possible inspirations among previous sets, we'd say that there's not much obviously resembling this one. Probably, the latest set coming from the Shadowlands' Sepulcher of the First Ones comes close. Yes, it has absolutely different colors and generally aesthetics but the concept of the helmet and feathers/tails of light on the shoulder pads and gloves are somewhat similar. 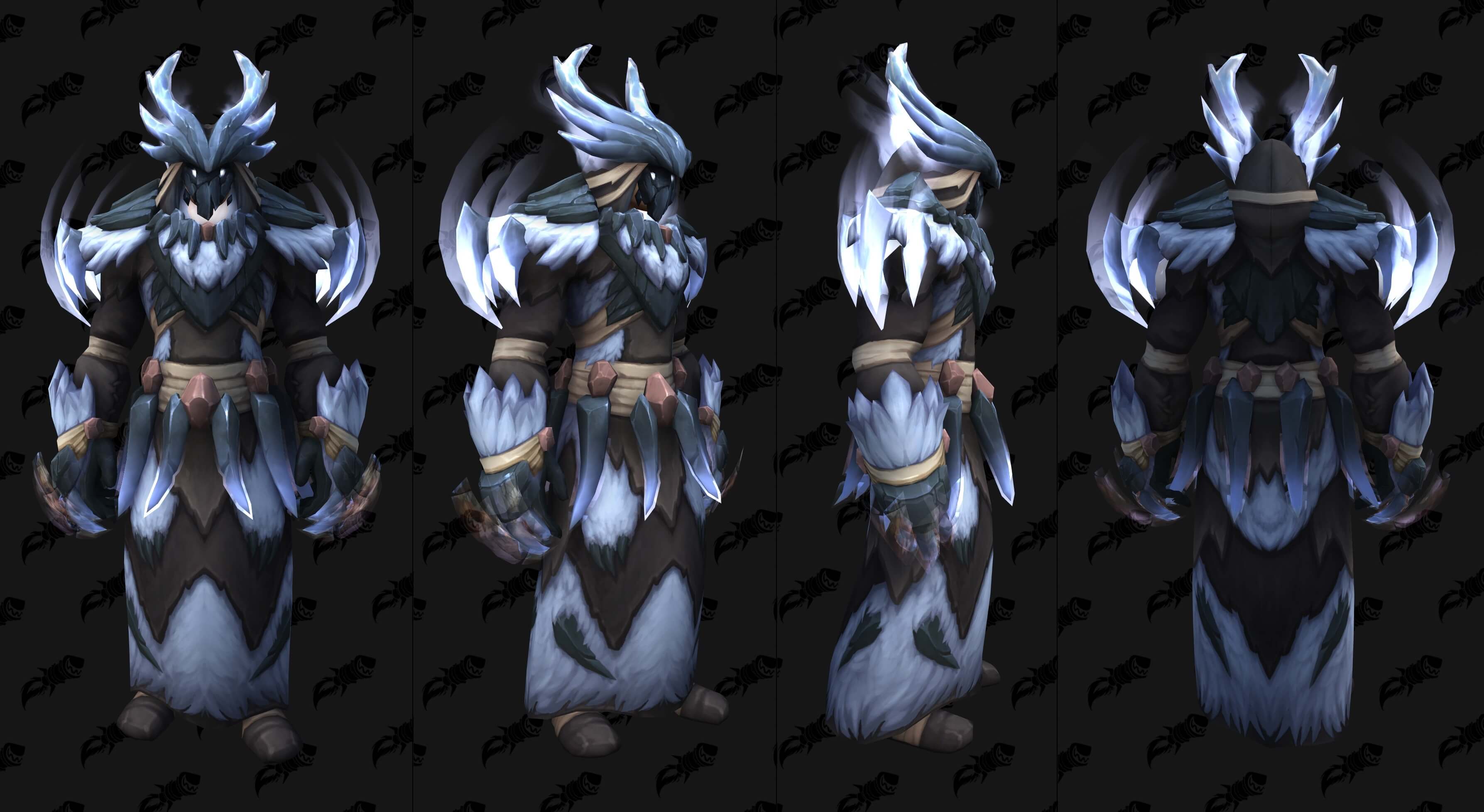 Ah, those upward horns on druid helmets. It won't be an exaggeration to say that they appear there way too oftener than they should. Anyway, we have them again in this tier (just like in the previous one). The helmet has this owl mask that looks pretty cool. We'd say it has something resembling the Night Fae covenant and it looks like a love letter back to Ardenweald's groves. It's not quite evident what this aesthetics has to do with the Vault of the Incarnates but whatever. It looks great and really suits the class greatly.
There was at least one more owl-based set for druids and quite recently, too. You could get it at the beginning of the Legion expansion from the Nighthold and Emerald Nightmare. It didn't have horns and kilt however. Also the shoulder pads were Elune-themed and much larger than those of the current set. 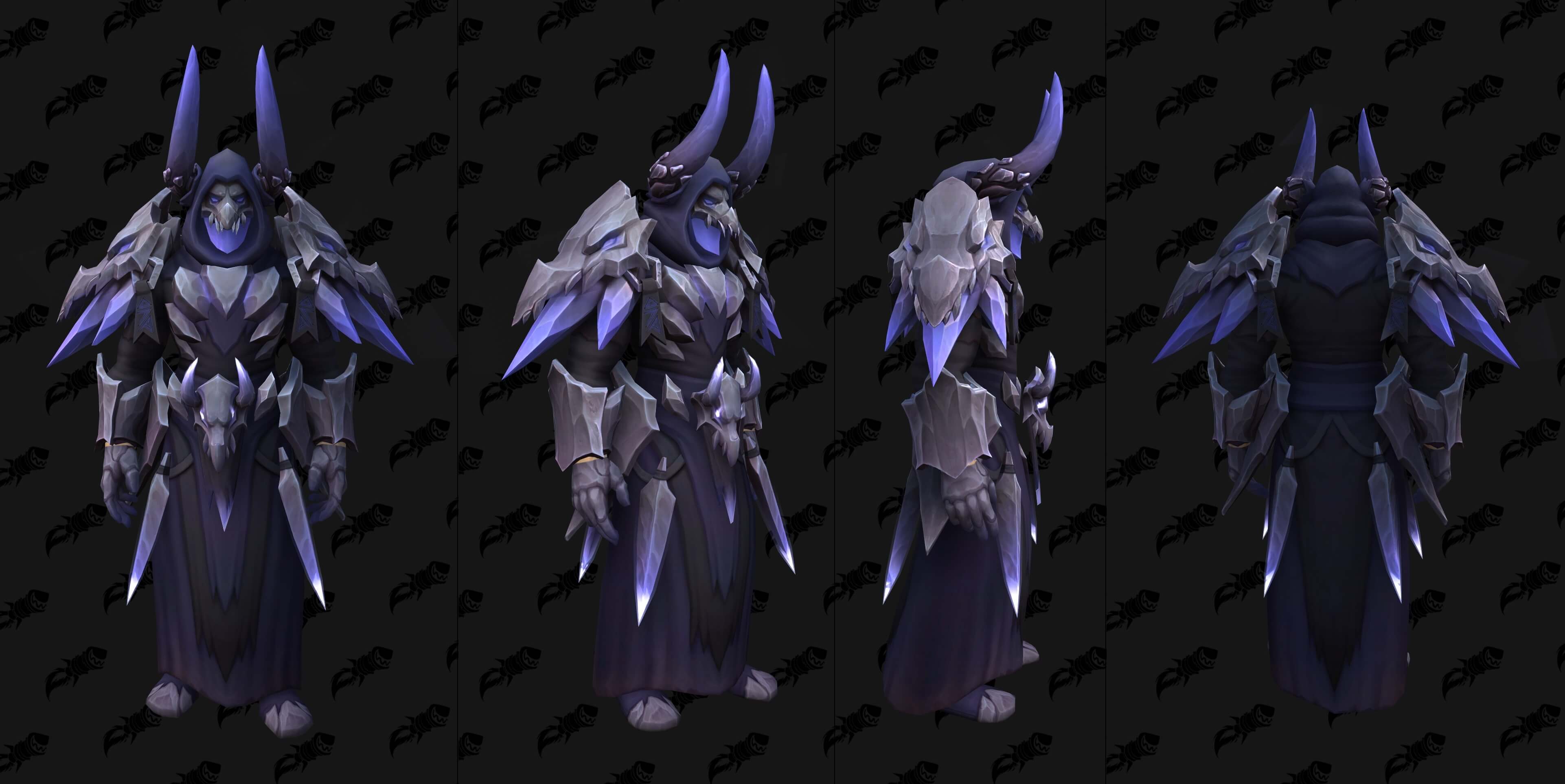 This set looks incredibly satisfying. Everything about is just in the right place. Nothing is too large or too bright, or something. Although shoulder pads are once again oversized – which is just what happens to all sets in WoW – otherwise it's perfect. It looks like a genuinely stylish set, not just some supa dupa armor of the world saver. The horns have this slight glow, just like the bottom of the mask and those blades below the shoulder pads. In fact, those blades must be dragon teeth and it makes sense since they are right next to dragon skulls. Perhaps, we could use some asymmetry for them but it's alright the way it is too. All in all, this set makes it absolutely clear that it's all about dragons yet it doesn't make it too annoying.
Warlock sets often have some peculiar things for helmets (Tiers 1, 4, 5, 11, 13, and so on) and this time we are lucky to have a more or less normal one for a change. Not as insane as it could be, that is. Also, it's great to be back to the grim aesthetics of the class after the unusual light armor from the Sepulcher of the First Ones. This set is not just about forbidden dark magic but also about hunting primal beasts. And in this regard it's even somewhat close to hunter aesthetics. As for other warlock sets that this one might have been inspired by, we believe that tier 8 had something to do with it. It also has a skull and a hood for the head slot although it's a bird's skull there, not a dragon's one. Naturally, there were no horns since birds don't have them but otherwise the style is somewhat resembling. 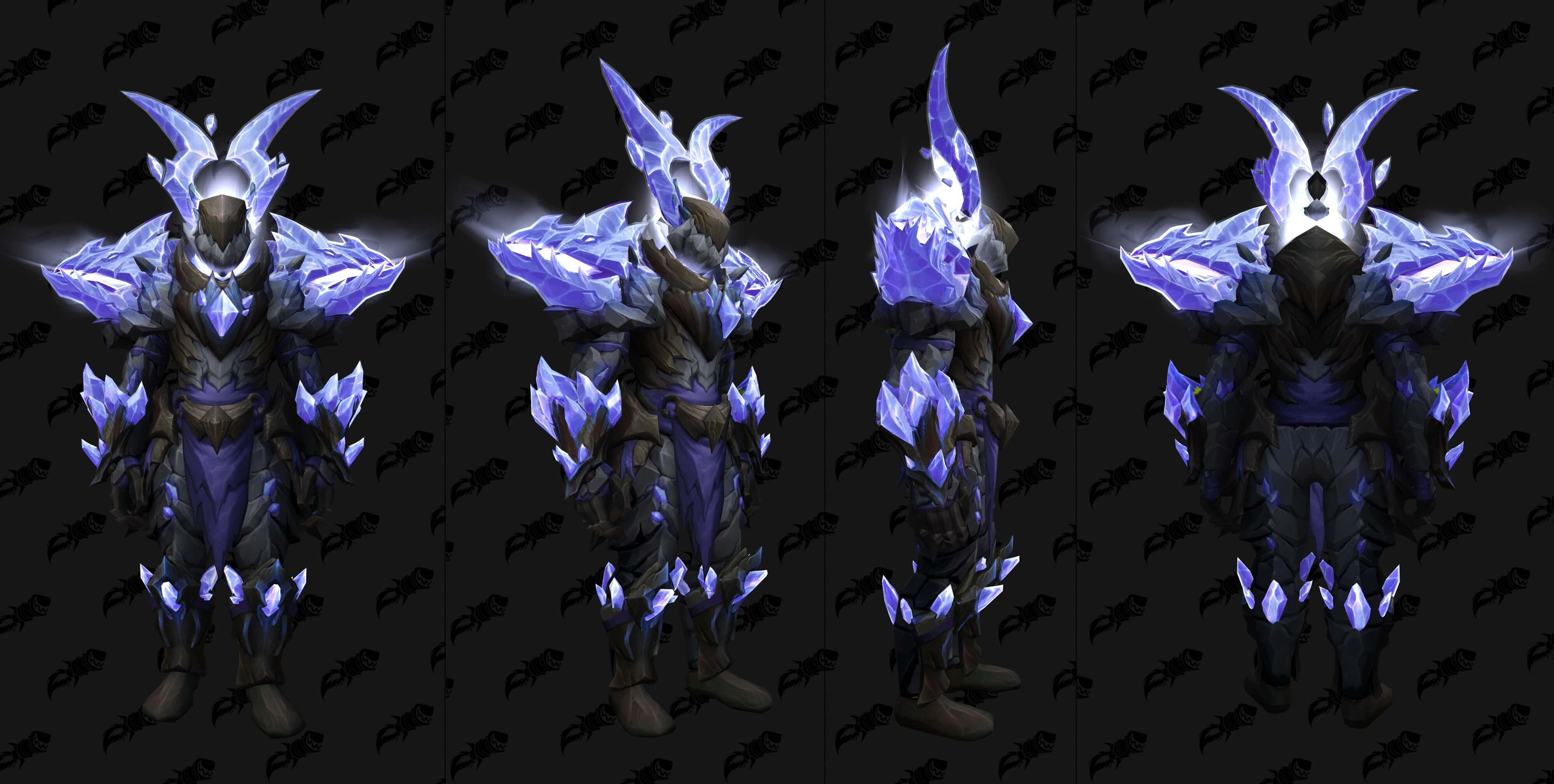 This plate set is the most badass one in the whole collection, in our opinion. It has a pure Cataclysm-era style: dragons and elements. Basically, that's what we are about to relive in the Dragonflight: dragons and elements! The shape of the set is just great and those gems on gloves and boots look very fitting. Probably the huge gem in the chest is somewhat too much but we gotta first see it in the game to have a better idea.
Our team has instantly got the reference to one set of the Cataclysm raid, Firelands. Surprisingly, that was one for paladins. It had slightly different elements and the kilt for the leg slot but it had similar shapes. Especially, a similar shape of the horns on the helmet. But not just that set: some more Cataclysm sets were thrown into the pot. Most likely, they were 2 warrior sets: from the first raid-tier of the expansion (tier 11, it came from 3 raids: Black Wing Descent, Bastion of Twilight, Throne of the Four Winds) and from the last raid, Dragonsoul (tier 13). Anyways, the result of mixing them up is really impressive and we believe that it might become a new transmog classic for plate classes.
***
So much for VOTI great sets. There are other sets too, of course: some of them are great too, while some are less so. You'll soon have an opportunity to see that armor in the game yourself! And if you want to see it equipped by your character, you can always have some help from us with a Full Gear boost! Our pro team will help your character collect all the remaining pieces for you to have a stunning look! To learn more about this service or VOTI sets in general, feel free to get in touch with us!
See VOTI Full Gear boost    Contact us
Share: Facebook Twitter